What is internet broadcasting

Internet radios: Received the whole world on the radio

Internet radio has always been a fascinating medium, as it allows you to listen to radio stations from all over the world in the best quality. When the first radio stations also streamed their programs online in the mid-1990s, maximum medium-wave quality was initially possible via the analog modem. With the advent of broadband connections, the streaming quality could then be increased significantly - today, FM or even HiFi quality is the rule for web radio. Since the spread of wireless Internet connections via WLAN, radio stations can be received wirelessly via the Internet directly via the router and thus even more independent of the PC.

There are now a large number of Internet radio receivers that make it possible to receive the huge selection of web radio offers and podcasts in the kitchen, bathroom or on the hi-fi system in the living room. Thanks to fast cellular connections from 3G / UMTS, it is now also possible to listen to web radio on the go, for example with a smartphone. In this guide, we explain to you how Internet radio works without a PC. 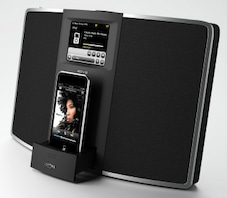 Icon from Revo
Image: Revo The basic requirement for receiving Internet radio is a broadband connection or a connection via cellular network. With the latter, however, it should be noted that extra costs may arise.

Although some devices can also be connected directly to the broadband connection via Ethernet, a WLAN router is recommended, as this increases independence - who wants to lay a long cable from the living room to the connection in the hallway? When choosing the device, you should first check whether you want to listen to Internet radio with a stationary receiver as part of the hi-fi system in the living room or with a portable receiver in the bathroom or kitchen, for example. Devices that are to be integrated into the hi-fi system are connected via a cinch, optical S / PDIF or jack plug output. Many WLAN radios can not only receive music from the Internet, but also play their own music collection from the PC or an external storage medium in the home network.

There is now a huge selection of portable receivers as well as radios that can be integrated into the home stereo system.

Operating the WLAN radios is usually child's play. After switching on, many recipients immediately perform a scan and keep an eye out for wireless routers. After their own station has been found, the user usually only has to enter the router's WAP or WEP encryption code using the remote control or the buttons on the device, and the huge selection of stations on the web radio is available. Most of the time, the stations are already sorted by country and genre. With some devices you can also enter the name of the desired station directly using the buttons.

In addition to radio stations, many receivers can also play podcasts, i.e. audio files stored on the network. Since there is no uniform standard for web radio in the network, most devices can play several formats, such as MP3, WMA, AAC, OGG, FLAC, WAV or AIFF.

In addition to web radio stations and the playback of files, many current devices also support music streaming services such as Spotify.

The ability to stream web radio from smartphones to wireless speakers is also becoming increasingly popular. Apps such as TuneIn, radio.de or the radio player are required for this. Many also use devices with voice assistants such as Amazon Alexa to listen to Internet radio stations. Internet radio can usually also be received on smart TVs. In addition to the radio sound, there are often pictures, so-called slide shows.

5G broadcast is currently being developed as a future transmission technology for mobile devices.