Is there a country called Kurdistan

Why are the Kurds so fragmented?

The Kurds describe themselves as "the greatest people without a land". In total, between 25 and 30 million Kurds live between Turkey and Iran (see graphic). There has never been a state of its own that extends over the entire area of ​​the Kurdish population. After the collapse of the Ottoman Empire, however, they achieved extensive local autonomy - but this was lifted a few years later. The dream of many Kurds of a state called "Greater Kurdistan" lives on. But the Kurds don't really speak with one voice. There are three Kurdish languages ​​and different religions. The Kurdish uprisings for more independence began at the beginning of the 19th century. At the moment, the Kurds in Iraq are particularly attracting attention. The Iraqi military and troops from the Kurdish autonomous region are now facing each other there. 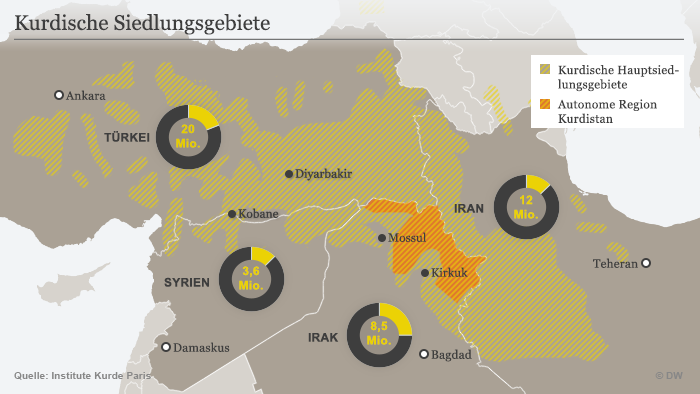 What is the situation like in Kurdish Northern Iraq?

Just three weeks ago, horns could be heard on the streets of Erbil, the capital of the autonomous region of Kurdistan in northern Iraq. The Kurds cheered the overwhelming majority with which they voted in a controversial referendum for secession from Iraq. Their independence seemed near. Baghdad would like to prevent the secession of the Kurds by all means and sent the military. After the first skirmishes, the Kurdish units, the Peshmerga, mostly withdrew without a fight. The oil-rich city of Kirkuk is now back in the hands of the Iraqi arms. How the Kurds will react is open.

What are Bundeswehr soldiers doing in the Iraqi Kurdish region?

With the advance of the so-called Islamic State from Syria to Northern Iraq, the Kurdish Peshmerga also mobilized and kept the IS terrorist militia in check. After the atrocities committed by IS became known, the federal government in Berlin decided to send weapons and military instructors to the Peshmerga. 32,000 small arms and 30 million rounds of ammunition have been delivered since then. German soldiers trained more than 14,000 Kurds in Erbil. Because of the increasing tension between the Iraqi Kurds and the central government, the Bundeswehr has now suspended training support. The German soldiers are still in the region. 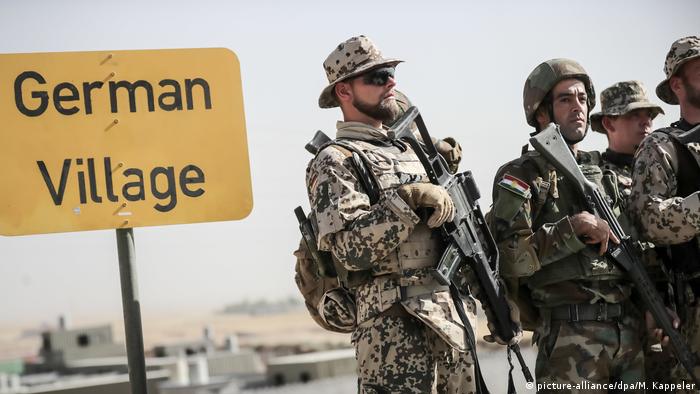 Peshmerga fighters are trained in the "German Village" practice village

How does the federal government see the situation?

The German government is observing the conflict in Northern Iraq with great concern. "Nobody should think that there is a military solution to the internal Iraqi tensions that have emerged in recent days," declared German Foreign Minister Sigmar Gabriel. He made this clear to the Iraqi Prime Minister in a phone call on Monday. "An escalation weakens all sides and threatens above all to destabilize Iraq and the region in the long term." Military actions would have to be stopped immediately and a solution found at the negotiating table. The federal government had already criticized the independence referendum.

What role does Iran play?

Up to twelve million Kurds also live in Iran. They are well integrated in Iranian society, but have been criticizing for decades that they are discriminated against by Tehran and are demanding more linguistic and cultural rights. Many of the Kurds live along the border with northern Iraq. Many people there cautiously support their Kurdish neighbors. Although Iran supported the Kurds in Iraq in the fight against IS, Tehran has now rowed backwards. The current conflict in northern Iraq is making the Shiite Iranian government nervous. She fears a conflagration and is therefore working closely with the equally Shiite-led government in Iraq. 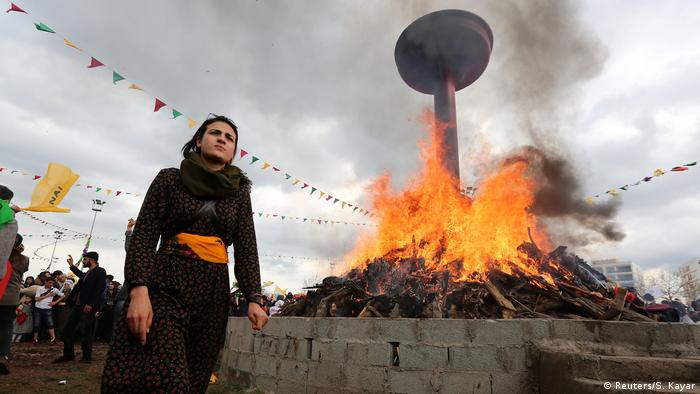 How is the economy in the Kurdish regions?

The regions in eastern Turkey inhabited by Kurds are considered economically weak and suffer from the conflict with the Turkish government. In Iran, too, the settlement areas of the Kurds are considered to be less economically developed than the rest of the country; The Kurdish areas in Northern Iraq have large oil and gas reserves. According to experts, almost 650,000 barrels of oil are produced there every day. However, according to estimates, funding is not sufficient as an economic basis for independence. Former CIA director David Petraeus assumes that the Kurds in Iraq would have to mine almost a million barrels a day in order to keep an independent state alive.

Where does the Kurdish question still play a role?

In addition to northern Iraq, Turkey is still boiling. Around eleven million Kurds live there in the south-east of the country. They too are interested in more autonomy rights. Radical groups are even calling for the Kurdish area to be divided. The situation has worsened since the end of the 1970s when the Kurdistan Workers' Party (PKK) was founded. The PKK is regarded as a terrorist organization in Turkey as well as in the USA and the EU. More than 40,000 people have already been killed in the Turkish Kurdish conflict, and it is estimated that more than half of them were members of the PKK. The Turkish AKP government began a "process of opening up" in 2002. Since July 2015, however, the violence has escalated again. The government has invaded the Kurdish regions militarily several times.

What is Turkey asking of the Kurds?

The Turkish state fears that the Kurds could break away from Turkey and found their own state. Although the head of the PKK, Abdullah Öcalan, has been imprisoned for 18 years, the fighting between the Turkish armed forces and the PKK is ongoing. Turkey is asking the PKK to lay down its arms. The pro-Kurdish party HDP is also being put under pressure. The HDP chairman is currently in custody. He is accused of terrorist propaganda and terror support - as well as the many other imprisoned HDP politicians. Developments such as the independence referendum in Northern Iraq are viewed in Ankara as a threat to national security. 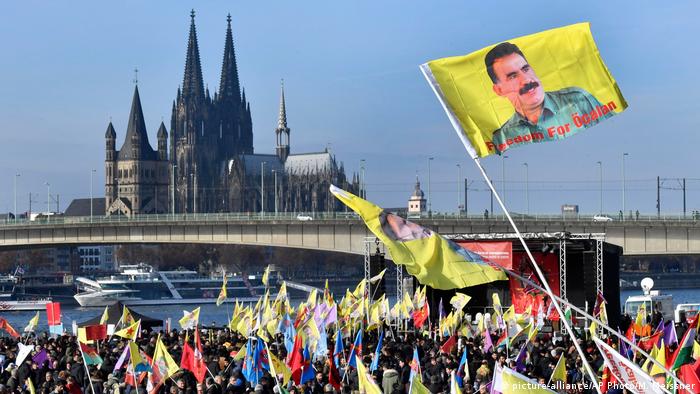 Still an idol for many Kurds: Abdullah Öcalan. Kurdish demonstrations against the Turkish head of government in Cologne.

How does the PKK justify its attacks?

The PKK has mostly justified terrorist attacks with the suppression of the Kurdish people. From the point of view of the PKK, the operations of the Turkish army in the Kurdish area were inadequate and aimed at "assimilating" the Kurdish people. Initially, the PKK demanded a Kurdish state of its own in southeastern Turkey, but over time it has renounced this demand and now insists on "democratic autonomy" within Turkey's borders. Radical groups of the PKK continue to support independence.

Is there a solution to the Kurdish question?

Hardly, at least not quickly. The Kurdish question can only be resolved individually in the individual countries. And it doesn't look like relaxation there at the moment. There is great distrust in Turkey and Iraq. The independence referendum in Northern Iraq has once again shown that many Kurds do not see their future within the existing state system. On the other hand, the behavior of the governments in both countries shows that there is little interest in making concessions to the Kurds.