Who was Hemchandra in Jainism

Hemachandra, Sanskrit हेमचन्द्र hemacandra, name of a scholar. Hemachandra is the name of a scholar in Sanskrit. Hemachandra is a famous acharya of the Jains. He was a remarkable Jain student, poet, and interdisciplinary scientist born in Gujarat. He wrote on grammar, sentence rhythm and contemporary history. During his lifetime he was honored with the title "Kalikal Sarvagya", which means something like "All-Knower of the Kali Age". 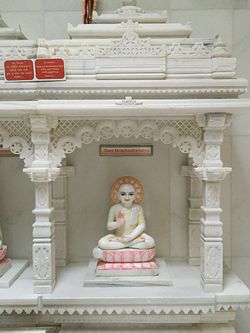 Depiction of Hemachandra in the Jain Center of New Jersey Copyright

Hemachandra was born in Dhandhuka, Gujarat, about 100 km southwest of Ahmadabad. His father Chachadey and his mother Pahini Devi, known as "Changdey", brought Chandradeva to a Jain temple as an ascetic at a young age. He took the name "Somachandra". The Modhera Tirtha Jain Temple is at his birthplace. The boy was given exercises in religious discourse, as well as Jain doctrine on logic and grammar. When he was 21 years old, in 1110, he was ordained as an acharya of the Jain Shvetambar group. He got the name "Acharya Somachandra", but became known under the name "Hemachandra".

During his time, Gujarat was first ruled by the Solanki dynasty. During the reign of Siddharaj Jaysinh I, Hemachandra became well known, but then served the successor Kumarapala as an advisor during the period from 1143 to 1173. During this time, Gujarat became famous as a cultural center. In 1121 Hemachandra was involved in the construction of the Jain Temple in Taranga. The teachings of Hemachandra had a calming effect on Kumarapala. As a result, the Jain Faith became the state religion of Gujarat. Even the slaughter of animals was forbidden.

With his anekantavada (non-absolutism) approach, Acharya Hemachandra probably spread a broad-hearted and tolerant understanding that the Kumarapala liked very much. However, with Hemachandra's increasing popularity, some Brahmins became jealous. They complained to the ruler about Hemachandra's arrogance and disrespect for the Hindu deities, he even refused to bow to Shiva.

When Hemachadnra was appointed by the ruler to the temple of Shiva, Hemachandra bowed very well in front of the picture - but with the qualification that he only bowed to the god who destroyed passions like attachment or hatred, which are considered to be the basic cause of bodily life - no matter if his name is Brahma, Vishnu or Jin. He made it clear that he had always been faithful to the basic principles of Jainism and therefore could only bow to a dispassionate and non-adherent god like Jin. This approach appealed to the ruler, who became a fervent follower and successor to Hemachandra and an advocate of Jainism.

The RSS feed from https://www.yoga-vidya.de/seminare/interessengebiet/andere-kulturen-religionen-ausser-christentum-hinduismus-shamanismus-indianer/?type=2365 could not be loaded: During the HTTP The request encountered an error: 404 Not Found

Video on the topic of Hemachandra

Hemachandra is a Sanskrit word. Sanskrit is the language of yoga. Here is a lecture on yoga, meditation and spirituality