Will Elastos ever reach 1 km

Elastos - Is this what the Internet of the future will look like?

With Elastos, another exciting blockchain project has appeared on the world stage since the beginning of the year, which aims to revolutionize the Internet with its own crypto currency (abbreviation: ELA) - there is talk of Web 3.0.

While at the end of the 90s Internet users had to be content with static websites (images, texts) and thus with the first generation of the Internet (Web 1.0), years later, Web 2.0 with dynamic content (JavaScript etc.) made web platforms such as Facebook only possible.

Web 3.0 is just around the corner, a blockchain-based Internet of the future that wants to give content providers and users back more power - investors should also benefit from it.

How does Elastos envision the Internet of the future?

Elastos is a Chinese open source blockchain project driven by software engineer and former Microsoft veteran Rong Chen and his team as part of the Elastos Foundation. Behind Elastos is an operating system for the blockchain that is supposed to enable an Internet without a server. 17 years of development time went into Elastos, the source code consists of 4 million lines of original code.

The Elastos project comprises a total of 3 open source projects: The Elastos development environment (Elastos Runtime), the Elastos P2P Network and the Elastos Blockchain. Elastos sees itself as a further layer that is placed over the Internet. This means: In fact, there are no longer any IP addresses, rather the user no longer calls up a website in the browser, but only an app.

What problem does Elastos want to solve?

With the additional layer, Elastos prevents apps and programs from directly accessing the network. Since network communication no longer takes place directly with the application, malware and other viruses can no longer get onto the user's computer.

Rather, apps and programs run in the Elastos development environment, which means that apps no longer have to be run on the blockchain. This has advantages when it comes to scaling blockchains, for example. Every application that is based on Elastos can create its own sidechains, which can be customized depending on the application.

Specifically, it is about digital assets on the blockchain being given an individual identity or identifier (ID). So far it has been the case that customers who buy an eBook or a digital music song do not actually purchase this content, but in fact only rent it for life - customers find it difficult to resell a film, an eBook or a digital music song.

This should change with Elastos by giving each digital asset on the blockchain its own identifier (ID). For example, a publisher can make 500 copies of a limited edition digital book that is traded on Elastos and cannot be reproduced.

Internet of the future - the crypto currency Elastos (ELA)

Furthermore, users can participate in Initial Public Offerings (ICOs) on Elastos with ELA tokens and thus acquire other tokens. The apps that are created on the Elastos blockchain can also handle payment processes in ELA tokens.

What's in it for investors?

Investors who attended the Elastos ICO at the beginning of the year can look forward to a price gain of around 350%. At this point the question arises why investors should still invest in ELA tokens, has the price already gone very strong?

The Elastos Foundation offers users who have a minimum of 300 ELA tokens (approx. US $ 20,000) the opportunity to log them for up to 3 years, giving investors 4 to 6% interest - comparable to a kind of fixed-term deposit if you like.

Conclusion: Elastos is an exciting blockchain project, but one that is still in its infancy

The crypto currency Elastos (ELA) is currently only traded on the Hubi.pro crypto exchange, but should also be listed on other crypto exchanges in the medium term. With the help of blockchain technology, Elastos wants to create an Internet of the future or a third generation network (Web 3.0) that promises more security and more effective income opportunities for the participants. Thanks to partnerships with China's leading blockchain NEO and China's largest automaker SAIC Motor, Elastos has great potential as a blockchain project. 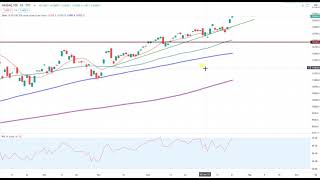 Wall Street - Tech's are dangerously hot! Yesterday it was again the technology stocks that were in demand on Wall Street. The Dow Jones Index, however, barely moved. However, the price development of the technology index worries me a little… ›read more