Archive: information and pictures from 1992 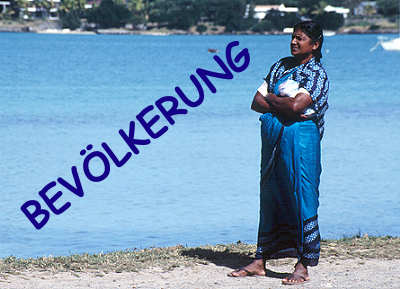 When you drive through the endless sugar cane fields on the island or on the beach Ile aux Cerfs lies, then you can hardly believe it: But the island of Mauritius is one of the most densely populated of all countries in the world. Over a million people live on the 1,850 km² island area. According to statistics from 1995, that was around 554 people per m². For comparison: In Germany there are only about 230 people.

On the island, but especially on the coasts, where tourists mostly live, you hardly notice it, because 46% of the population lives in the cities.

A little more statistics: the birth rate is 18.3 per 1,000, life expectancy is 71 years (74 for women and 66 for men). However, the population explosion only started after diseases such as malaria and other epidemics had been successfully combated. In 1867 the death rate was 247 per thousand and today half of Mauritians are under 20 years old.

The diversity of the ethnic groups is unique, most of the residents are voluntary or involuntary immigrants: 68% are Indo-Mauritians, 27% Creoles of African or Malagasy origin, 3% Chinese and 1.5% whites, mostly Franco-Mauritians.

When so many cultures and skin colors live in a small space without attacking each other, it is quite unique in the world. Here in Mauritius there is a climate of tolerance and respect for otherness, but one still mostly remains rooted in the social group and usually marries among each other.

An instructive example for some European tourists who believe that their country is being "foreigned" just because there are a few mosques and some people are walking around wearing headscarves.

Along with the Europeans, the Creoles are the oldest immigrants to the island. For the hard work on the plantations, the Dutch and the French took slaves from the beginning, who were brought in from Madagascar and Africa. How they were treated by their masters is known, the first settlers had a free hand and could deal with the slaves as they wanted. When the English took over the French colony in 1815, there were around 63,000 slaves for every 15,000 white Europeans.

After slavery was abolished, second or third generation people stayed in the country. In the course of time they combined with the layer of hybrids that it after "code noir" the French colonial power might not give, but ...

This is how the second largest population group arose - the Creoles. They still speak Créole today and belong to the Roman Catholic faith. 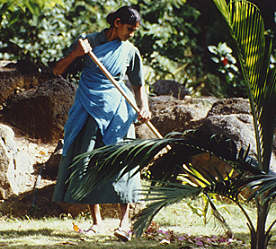 Indians and Pakistani make up the majority and they are dominant in all areas of economy, politics and culture. Those who came to Mauritius on the basis of employment contracts immigrated from various parts of the country, because after the liberation of the slaves on the plantations, they no longer wanted to continue working among their peers. The plantation owners were forced to look for other workers and therefore brought cheap Indian labor into the country in the middle of the 18th century.

These immigrants had different linguistic and religious backgrounds: Hindus, Christians and Muslims who spoke different dialects. Almost 70% of today's population are of Indian descent, mixed marriages with other population groups are also rather rare here. The women from this group can often be seen in traditional silk saris with iridescent colors - very nice to look at, these brightly colored and magnificent robes in the streets of Mauritius. The married women wear that Bindi on the forehead. This little red dot is a lucky charm and is supposed to guarantee the woman, who is responsible for the household, sufficient prosperity.

The first Chinese came to Mauritius around 1800, neither as slaves nor as low laborers, but as merchants. They provided luxury goods such as silk and porcelain for the white upper class. In Port Louis, a larger Chinese quarter emerged, and here too, different languages ​​were spoken. Mostly, however, Cantonese.

Remarkably few women were of Chinese origin among the first 3,500 inhabitants, only 58. Today the proportion of Chinese is only 3% of the total population.

The official language is English, so as a tourist you can get through anywhere on the island. Creole is the mother tongue of many and French is also widely spoken. Other languages ​​are Hindi, Tamil, Telegu, Gujarati, Marathi and Cantonese Hakka.

The most widely spoken language is of Indian origin - the Bhojpuri Dialect. At home, the language of the country of origin is very often spoken within the families, Chinese families converse in Cantonese, Indians speak Hindi, etc. The vernacular is Creole, but English is spoken again in offices and administration, and the upper class is conversing rather in French.

Most Mauritians prefer to speak to strangers in French, although English has been the official language for a century. You learn English at school or you need it for your job.

Mauritius is a democracy with political parties, interest groups and trade unions. Head of State: Karl Auguste Offmann (since February 25, 2002). Before him, two presidents of the island state resigned within three days. Cassam Uteem and his successor Angidi Chettiar each refused to sign the new anti-terror law. Among other things, this would have allowed house searches to be carried out without judicial authorization.

Where in the last century only a few masters dominated an army of slaves, a tolerant democracy has emerged to this day.