Which tech stocks are paying off

While Trump is waging his trade war and many products threaten to become more expensive, technology companies in particular remain unaffected by punitive tariffs. Online and Internet services can continue to grow as they did before. If the dispute escalates, more capital is likely to flow into these stocks than is already the case.

With the extreme inflows of funds and price increases, however, the fear of a bubble in technology stocks increases. A look at the Nasdaq shows that the party happily continues. Over a three-month period it was over 10%, over the year almost 28% and the last five years 142%. The performance is a good double that of the S&P 500. The gap between the TecDax and the Dax is even greater.

No comparison, however, with the stock market values ​​of the US giants. Amazon, Apple, Facebook, Google and Microsoft alone bring in 3.8 trillion. US dollars on the scales. That is more than the gross domestic product (GDP) of Germany - which shows the explosive power of a bursting bubble of technology stocks. If the share price fell by an average of 25%, the GDP capital of medium-sized economies would be destroyed.

In addition, a crash would cause stocks in the Nasdaq that do not belong to the technology sector to crash. Apart from that, not only would smaller tech companies get into financial difficulties, but also a company like Twitter, which has only made losses so far, would have significant problems. And Twitter isn't the only company keeping its investors in line despite its lack of profits.

No comparison with Dot.com

In contrast to the burst dot.com bubble at the turn of the millennium, however, there are tangible business models that sometimes need a little advance. With the digital revolution, they have the best prospects for significant growth. In this respect, course corrections can at best be assumed. However, the analysts' opinions are divided. They also argue about whether there is a bubble in technology stocks at all.

What speaks for it: Even cheaper stocks are sometimes valued at 30 to 40 times corporate profits. Not to mention big names like Amazon, where the value is ten times as high. Bladder or not, the relationship is definitely unhealthy. At some point it has to adapt to reality. This was also the case in earlier decades of stock exchange history, when financial, real estate or energy stocks dominated the field for decades.

The party could go on until then. However, young technologies are increasingly becoming the norm in the economy, because they are spreading into ever more classic sectors. This means that they too are increasingly dependent on the economy. The previous defensive character will fade. Conversely, companies in other sectors will also move towards technology. VW boss Diess announced recently that he wanted to convert the automaker into a technology group.

Anyone who holds shares in large tech companies like Amazon should keep one thing in mind: at some point, their over-dominance can be fatal. Their market shares are already so high that the antitrust authorities are targeting Facebook and Google. Amazon is likely to follow suit. AT&T was once the perpetual monopoly in the American telecommunications sector until it was broken up in the early 1980s. Two thirds of the stock market value went up in thin air - without a bubble. 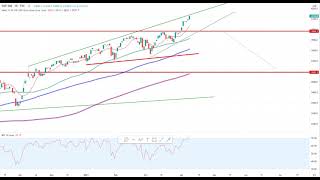 Wall Street - Amazon has reached its maximum target! The technical chart situation continues to be excellent. The currently slightly overbought market status based on the daily chart could lead to a small consolidation, but this has probably stopped again at the breakout zone… ›read more