What was the Confederate fighting for?

Germans in the American Civil War

Two enemy armies clashed from July 1st to 3rd, 1863. Over 80,000 men in the blue uniform of the United States of America fought against over 70,000 gray-coated Confederate soldiers near the small town of Gettysburg, Pennsylvania. For three days, these two armies fought the bloodiest battle in the American Civil War. Acquaintances, friends and even family members faced each other on the enemy side. Around 50,000 men ended up dead, missing, or trapped. Gettysburg was the beginning of a turn in the course of the war in favor of the northern states. The Confederates lost this crucial battle of their advance on northern territory and were henceforth on the defensive. The war dragged on for almost two years, but the only fighting was in the southern states. Hundreds of thousands of Germans were among the soldiers who fought the battles of the American Civil War like the one at Gettysburg. These immigrants from distant Europe made up around a tenth of the Union army.

A real stream of emigrants left Germany for the USA in the 1850s - and their share of the population there rose sharply. Almost 1.3 million US residents were German in 1860. "Most of the German emigrants were economic refugees," says Heike Bungert, who teaches North American history at the University of Münster. "Far better known, however, are the so-called 48ers, the supporters of the German revolution of 1848, who emigrated to the USA after its failure." In March 1848 the citizens of many of the small German states revolted and demanded the introduction of constitutions and democratic reforms - in vain. Many revolutionaries had to flee the country. In America, the German newcomers hoped for freedom and prosperity - in every respect. "Religious freedom should not be forgotten as a reason to emigrate," adds Bernd Stöver, who teaches contemporary history and contemporary history at Potsdam University and who in 2012 published a history of the USA. 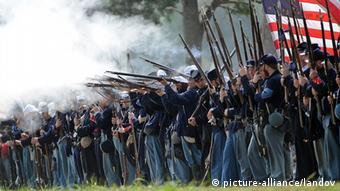 In the United States, a momentous conflict was looming: When Abraham Lincoln was elected President on November 6, 1860, the country was on the verge of division. Above all, the question of slavery sparked the conflict: In the southern states of the USA, many large landowners kept millions of mostly African slaves to cultivate their cotton plantations. In the northern states, however, there was no slavery. Many Northerners also refused to enslave a person. When the future President of the USA now spoke out as an opponent of slavery, eleven southern states of the USA declared their exit from the Union and united to form the Confederate States of America. On April 12, 1861, the war between these two confederations began.

Abraham Lincoln called volunteers to arms to subdue what he believed to be insurgent states. Numerous Germans followed this call. Ten regiments of German volunteers came from New York State alone. A little later, German Union soldiers also protected Lincoln's inauguration as president. Around 216,000 American citizens of German origin are said to have served as soldiers in the Union Army during the four years of the civil war. But why did so many Germans volunteer for the army? "Of course there were Germans who volunteered for the army for economic reasons. There was pay there," explains Heike Bungert. "And then there were the 48ers, who were mainly political refugees." 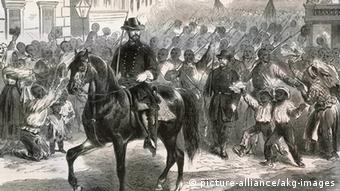 The German ethnic group had been courted by President Lincoln, but not every German was willing to go to war. "It has long been thought that the Germans would have participated more than average in the war," explains Heike Bungert. "Meanwhile, however, we know that this was very different depending on the state. In Wisconsin, the participation was proportionally rather low. In contrast, the commitment was high in New York and Missouri. In Missouri, the Germans actually tipped the balance for the State did not join the Confederation. "

To set up German regiments, however, was initially primarily a practical consideration. Since many Germans were barely able to speak English, it was easier to group all Germans in one formation and thus avoid language difficulties. A "German" company was often set up in regiments in which the Germans were a minority. In such associations it was mintly German: Many German soldiers could enjoy beer, sausage and sauerkraut at the beginning of the war, even the uniform in some German regiments was based on German models. And where such German-American soldiers stopped, there was soon a choir and a gym. 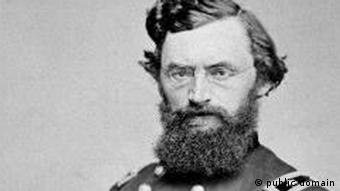 Like music it was for him, wrote a German-American sergeant in 1864, "when native, German, robust, good words sometimes ring in your ear". A German soldier even deserted from his English-speaking unit to a German combat unit after the start of the war.

But Germans also fought on the side of the southern enemy. In much smaller numbers, however. Almost all of the German settlement areas were in the north. "Only a few went to the southern states, there was a larger colony around New Orleans and many settled in Texas," explains Heike Bungert. Bernd Stöver knows: "About 5000 Germans fought on the side of the Confederation." However, not every German in the south was a supporter of slavery; there were even attacks on Germans who had spoken out against slavery and secession.

"Remove the Germans from the Union Army and we'll make short work of the Yankees," the famous Southern General Robert E. Lee is said to have once said. Whether the quote is correct or not, the Germans apparently had a reputation for being able soldiers. Bernd Stöver sees such statements as a kind of mythization: "This is of course also a form of politics of the past. The brave German who fights in the civil war and wins the war almost single-handedly." In fact, public opinion about the Germans' commitment fluctuated considerably. "If a German regiment fled in a fight, it fell back on all Germans," says Heike Bungert. Apparently, however, many Germans were hoping for recognition for their war effort.

A miner from Saarland said in 1861: "Now the Americans no longer mock us because they know that we are the mainstay of their country and their freedom." After the end of the civil war, the surviving Germans returned to their hometowns - where German was spoken for decades. "It was not until the First World War, and later the Second World War, that later forced the complete integration of the German communities into American society," summarizes Bernd Stöver. No one knows exactly how many German-American soldiers died on both sides.