The caste system was abolished 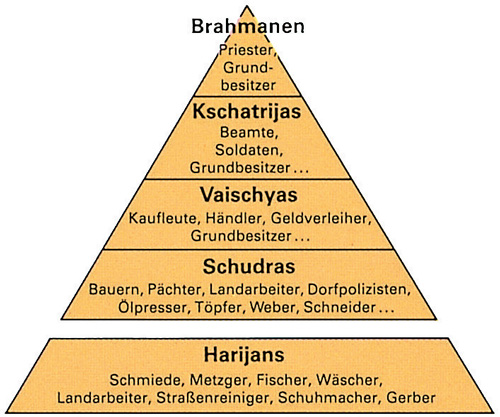 The term caste (Portuguese casta: the family gender, origin or race; derived from Latin castus: pure, chaste) stands for a demarcated group of a population within a society. This group performs precisely defined religious, legal or economic functions. The individual, mostly religiously legitimized castes of a society, in contrast to the mainly economically defined classes, are impervious to one another. The social hierarchy is passed on from generation to generation, so that caste systems have no social mobility.
The social and societal fabric in India is characterized by such a caste system. The followers of Hinduism regard the caste system as a social system which, through religious structuring, corresponds to the eternal law of the world (Dharma). The social function of the castes is that a caste represents the Indian community of solidarity, i.e. H. secures the subsistence level of the unemployed, the elderly, etc.
The characteristics of an Indian caste are: hereditary affiliation to the caste; Custom to marry only members of the same caste; Restrictions on choice of profession and personal contacts.

The emergence of the caste system

The roots of the traditional Indian caste system go back to 1500 BC. When nomad groups (Aryans) of the Indo-European language group immigrated to India from the north. The Indo-European priests introduced a simple caste system into society according to the ancient sacred literature of India. The light-skinned Aryans were divided into three free classes and thus distinguished themselves from the dark-skinned locals, who mainly worked as day laborers, farm workers, artisans and servants. Thus a fourth "estate" was created, which was obliged to serve the three higher castes. Outside the social order and confined to performing the lowest and most unpleasant services, were the casteless.
The social system or the caste system in India is an integral part of the Hindu religion and, in a slightly differentiated form, is still of great importance in the life of the Hindus to this day.

In essence, the traditional caste system consists of four castes (varnas). These main castes are subdivided into numerous sub castes (jatis), which are further divided - in total there are over 3,000 different sub castes.

The four main boxes are called:

Below these four main castes are the Harijans, who fall out of the established social system because they do not belong to any caste. A subgroup are the "parias", the untouchables, who are only allowed to do the lowest work.
Outside the social order and still among the casteless are the non-Hindus. Who z. B. leaves Hinduism automatically leaves his caste. Christians and Muslims therefore also belong to the casteless, and have thus become "untouchable" for strictly ritual Hindus.
By belonging to a certain caste one gains social and religious privileges. However, numerous do's and don'ts must also be observed. The caste system is characterized by three main rules: One only marries within one's own caste (endogamy); one may only eat together with members of one's own or a higher caste or accept food from them, because this is the only way to guarantee ritual purity; one may only take up the profession of his caste.

Life in the box

From birth, and only through this, a Hindu belongs to a certain caste. The belief and caste system are deeply rooted in India. Since the Hindus believe in rebirth, they live strictly according to the prescribed rules of their religion. By observing these rules, they hope for a better position in the next life, i. H. Rebirth into a higher caste. However, if a Hindu breaks the rules, he could also be reborn as an animal in the next life, which, according to Hindu belief, means a punishment.

The most famous fighter against the caste system was Mahatma Gandhi (1869-1948). He led the great nonviolent movement against the British colonial power in India and called for resistance. Gandhi found that the caste system did not fit this common protest movement. In his opinion, the lower castes and the "pariahs" also had a right to a life without hunger and poverty, to education and a profession of their own choosing.
The caste system was officially abolished by the 1949 Constitution, but it still determines parts of India's social life. Today's legislation enables every Indian to pursue any occupation across castes, but in practice - e.g. B. in marriage or career - belonging to a caste continues to be of considerable importance. Caste-less people continue to work predominantly in "unclean" professions such as street sweepers, corpse bearers and tanners. It is said that the traditional order of society continues to show its influence wherever the areas of "roti aur beti" (bread and daughter) are affected.
In urban societies today it is normal for members of different castes to come together for meals, and even in rural areas the old structures no longer have absolute validity, but are still deeply anchored in people's consciousness.

Back to the terrace
<?