Going to bed too late in the evening or getting up particularly early in the morning due to an appointment - everyone knows such a short-term lack of sleep and the body can compensate for it well. The situation is completely different with persistent and long-term lack of sleep. Those who do not get enough sleep over a long period of time are overexploiting their bodies and putting their own health at risk. 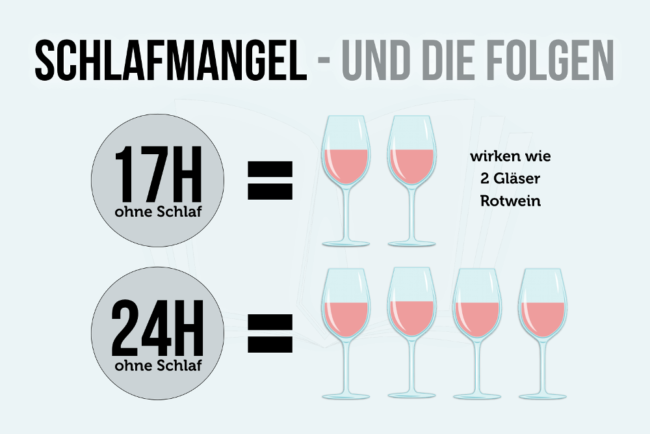 Symptoms and consequences of lack of sleep

Lack of sleep is rarely taken seriously. "That little bit of tiredness is not that bad ..." Anyone who talks like this has not yet experienced a persistent lack of sleep themselves. The consequences of such a lack of sleep are enormous. Mind you, this is not about short-term sleep disorders, such as jet lag or an exceptionally shorter night. If the lack of sleep persists over a longer period of time, this can manifest itself in numerous symptoms:

Hallucinations or delusions due to lack of sleep can occur after just 24 to 48 hours. Most of these symptoms go away in a very short time when the body gets enough sleep again - if the lack of sleep is not corrected, there are serious consequences.

In order for the immune system to function and protect your body from infection, it needs adequate sleep and rest. When there is a lack of sleep, the immune system is affected. As a result, you are sick more often and more susceptible to infections.

Too little sleep can be very stressful for your body and affect the heart. A lack of sleep increases the risk of high blood pressure, cardiac arrhythmias or even a heart attack. In the worst case, the effects of lack of sleep can even lead to death.

Persistent lack of sleep can also affect your weight. People who sleep too little gain weight faster. Behind this is a mess in the hormones, which do not work as usual due to the lack of sleep. If you lack sleep, you will experience more frequent food cravings.

Lack of sleep also affects personality: those affected become irritable and moody, and motivation drops. Loss of drive and excessive demands are the result. The bad mood is the least of the problem. A lack of sleep has been linked to depression as a symptom. There is a risk of mental illness.

Lack of sleep increases the willingness to take risks

A study by researchers from Zurich has made another critical discovery in addition to the known (see above) effects and symptoms of lack of sleep.

They examined the risk behavior of male students aged 18 to 28 years. To do this, the test subjects had to make a decision twice a day: Either guaranteed to receive a smaller amount of money or to take risks and choose a small probability for a larger amount of money.

As is typical in a game of chance, the second option promised a higher profit, but also the risk of going completely empty and getting nothing at all. The astonishing result of the study: test subjects who suffered from lack of sleep because they only slept five hours a night for a week made far more risky decisions.

Those who slept around eight hours a night, on the other hand, decided less often to take a high risk. From this, the researchers concluded that lack of sleep has a direct impact on risk-taking. Before you make an important and potentially momentous decision the next time, you should therefore make sure that you do not suffer from lack of sleep. The advice to sleep on it for another night is therefore doubly helpful.

Problems with lack of sleep at work

Everyone has probably dragged themselves to work quite tired. With enough coffee you can get over the day, but chronic lack of sleep that lasts for weeks or even months becomes a serious problem at work.

It starts with the performance, which continues to decline. You can no longer concentrate on your tasks, you make mistakes more often, you become slower in processing ToDos and you can no longer manage your workload. Studies assume that the economy incurs billions in losses every year as a result of lack of sleep.

On an individual level, the cost of lack of sleep looks different: your boss is dissatisfied with you, you often hear criticism and negative feedback. In the worst case, your job will even be at stake at some point. Nobody can do anything with an overtired employee.

Causes of Lack of Sleep

Of course, a lack of sleep is the result of a lack of sleep over a long period of time. However, those who come to terms with this cause do not think far enough. The real question is what reasons are causing you not to get enough sleep?

A lack of sleep can have physical causes and occur, for example, as a result of illness. Restless legs syndrome or sleep apnea are possible nighttime difficulties that can lead not only to restless sleep, but also to persistent lack of sleep. This reduces both the quality of sleep and its duration.

On the other hand, individual lifestyle habits can be identified far more frequently as the cause of lack of sleep. In recent years in particular, smartphones and tablets have become more important as reasons for lack of sleep. The amount of blue light that screens emit significantly delays the sleep phase and can lead to a lack of sleep. Instead of calming down, we surf the web on our smartphones in bed.

Stress is one of the most common causes of lack of sleep. It does not matter whether this is professional or private. Those who feel themselves exposed to great stress suffer from the tension and cannot switch off in the evening either. Problems are dealt with at night, the stress causes brooding and prevents sleep.

In addition, a wrong self-perception leads to a lack of sleep. We often underestimate our own need for sleep, persuade ourselves to get by with a few hours and thus contribute to the lack of sleep ourselves. Although the need for sleep is very different from one individual to the next, it is essential that you be honest with yourself.

Lack of sleep: what to do?

If the lack of sleep persists, you need to take action. But what can you do about lack of sleep? Those affected often do not know what to do if they lie awake at night. We have collected tips with which you can do something about the lack of sleep: