Is Panama really independent from the USA?

The land around the canal

Probably Panama's most important characteristic is first and foremost that it is "in between". It is the narrow wasp waist between the Atlantic and the Pacific, between North and South America. And so the land was crossed and run over for centuries, used and exploited, cut through, built on, sold. As early as the beginning of the 16th century, the Spanish conquerors recognized the isthmus as an ideal connection between the Atlantic and Pacific Oceans. Three centuries later, the United States secured the right to cross the isthmus "for ever".

With the help of the USA to independence

At that time Panama was still a province of Colombia, but was planning its independence. Since Colombia rejected the US offer to build a canal through the strait, the United States unceremoniously supports the Panamanian independence movement. The founding of the republic was proclaimed on November 3, 1903.

Depending on the big brother

Now - when is that? Protesters against the free trade area

A few months later, construction of the canal began under American leadership. All rights of use were with the USA, Panama received a small annual grant and from 1964 onwards became the location of the notorious US military academy "Escuela de las Americas". Up until the closure in 1984, over 60,000 military and police officers were "trained" there; Among the graduates, many of the dictators who committed human rights crimes between Rio de la Plata and Tierra del Fuego in the 1970s: Manuel Antonio Galtieri, who led Argentina into the Malvinas War, Augusto Pinochet, who was even director of the academy in the meantime and - ironically, Manuel from Panama Antonio Noriega.

After the mysterious plane crash of the then President Omar Torrijos, Noriega took power in 1983. His dictatorship plunged the country into a deep economic crisis. In 1989 the formerly most important ally of the United States in Latin America was overthrown by the United States (at that time under Georg Bush Sr.) in Operation 'Just Cause'. He was not only linked to the Medellín drug cartel but also to the CIA.

In 1989 Panama returned to democracy. And received - as stated in the 1977 Canal Treaty - ten years later, sovereignty over the canal. 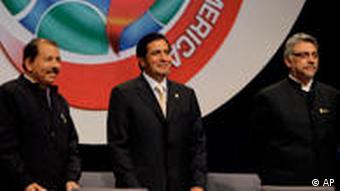 Panama's President Martín Torrijos at the America Summit in April 2009

Since 2004, Panama has been ruled by Martín Torrijos, the son of Omar Torrijos. He contested his election campaign with the slogan Sí, se puede and with the promise to fight corruption and create security and employment.

Unlike his predecessors, Martín Torrijos has so far benefited from a strong and stable economic upturn. In the first four years of his reign, which is now ending, real GDP grew by an average of eight percent, while the unemployment rate fell from over twelve to an estimated six percent. Torrijo reformed social security, signed free trade agreements with the United States and Costa Rica, and launched a housing program.

In March 2006, Torrijos presented the plan for the largest public investment project in the country's history to date: the expansion of the canal for the new generation of giant freighters. The Panamanians approved the $ 5.3 billion project in a referendum. The 80-kilometer-long waterway has been expanded since the summer of 2007 for more than four billion euros. The prestige project aims to make the leap from a developing country to a first world country. In Panama City this goal seems to be very close.

However, the gap between rich and poor is still very large. Away from the skyline of the capital, around 70 percent of the population live below the poverty line, including many indigenous people and the majority of the rural population. Money laundering, human and drug trafficking continue to flourish in the transit country, and human rights organizations are complaining of repression and threats. (ahe / bpb / faz / sz / nzz)