What do you think of Alexander Vindman

Testimony in the impeachment procedure: law or president

After 21 years, Alexander Vindman leaves the US military. After giving evidence in the impeachment trial, Trump made life difficult for him. 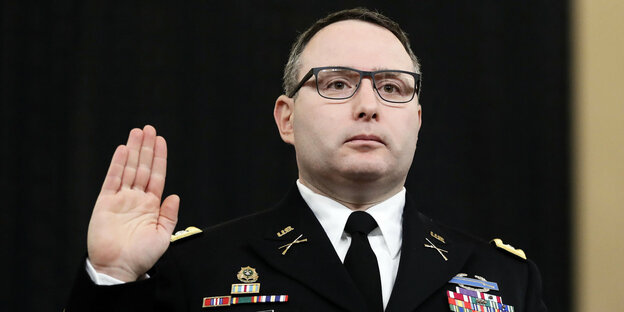 WASHINGTONtaz | The decorated US Army officer Alexander Vindman played a crucial role as a whistleblower and witness in the impeachment proceedings for President Donald Trump. But now it is himself who had to resign after 21 years in the US military.

On Wednesday, the lieutenant colonel retired from the military after realizing that his future within the American armed forces will forever be limited. Vindman's lawyer David Pressman said in a press release. “Through a campaign of bullying, intimidation, and retaliation, the President of the United States sought to force Lt. Col. Vindman into a choice: follow the law or please the president; to honor the oath or to protect the career, "it said in the statement.

Vindman's attorney described the decisions his client faced as something that should not happen to anyone in the United States. The lieutenant colonel only spoke on Twitter. One photo shows Vindman sitting in front of his laptop with the words: “Today I officially applied for my resignation from the US Army, an organization that I love. My family and I are looking forward to the next chapter in our lives. "

The lieutenant colonel's story begins in Ukraine, where he and his twin brother were born. At the age of three, Vindman and his family left the former Soviet republic in the hope of a better life in the United States. Over the next four decades, Vindman realized his personal American dream. He became a decorated army officer, diplomat, and Harvard graduate.

"Nothing will happen to me just because I tell the truth"

But when he overheard the phone call between Trump and the Ukrainian President Volodymyr Selensky, his life changed suddenly. In the phone call, Trump called for an investigation into his opponent, former US Vice President Joe Biden, and his son. Vindman described the call as "inappropriate" and reported it to his manager. It was this report that really got the impeachment proceedings against Trump rolling.

As a witness in November 2019, Vindman had to face questions from American congressmen in one of the many hearings on the Ukraine affair. In his opening address, Vindman also alluded to his immigrant past. He stated that his testimony could mean death in a country like Russia. "Don't worry, nothing will happen to me just because I'm telling the truth," he said in a passage from the speech addressed to his father.

His life was not at stake, but President Trump and his supporters ensured that his military career now came to an end. The president, however, was acquitted in the impeachment process in February of this year.