Why is night vision green 1

The ability to see in the dark and to carry out military missions is indispensable in modern armed forces. General Barry McCaffrey, commander of the 24th US Infantery Division in Operation Desert Storm in 1991, stated: "Our night vision capability provided the single greatest mismatch of the war." In the Bundeswehr, too, monocular and binocular night vision devices are used both in flight operations and by ground troops.

Night vision devices (NVG, Night Vision Goggles) generate a green or black and white image (gray or green levels) on a phosphorescent screen located close to the user's eye. Image intensifier tubes with white or green phosphor color are used here. The Bundeswehr currently uses devices with both phosphor colors in parallel. The aim of the study presented here was to investigate whether the choice of phosphor color leads to differences in user performance.

This question arose from the finding that the staff of the Special Forces Command (KSK) had developed individual preferences for one of these two colors - mostly white phosphorus - in the daily use of night vision technology by the special forces.

Since the possible performance with NVG is difficult to identify from the respective technical information on the devices - also because different environmental conditions have a significant influence on the resulting performance - a test setup was developed that at least approximates the performance with the real conditions of use who can compare devices.

Fig.1: Course plan with station run (red) and target chart (green)
49 members of the special forces of the Bundeswehr ran through a task course using sharp shots (4 stations, 3 - 5 shots each) under day and night vision conditions. Inclusion criteria for study participation were visual acuity of at least 0.8 in the Snellen eye test (LogMAR 0.1) and stereo vision of at least 40 arc seconds. The course was completed three times by each test person (daylight, NVG with green phosphorus, NVG with white phosphorus), the order of the runs was randomly assigned to the test persons. The groups were then compared with one another with regard to processing time, accuracy of hits and subjective self-assessment.

Fig.2: Image intensifier chart (BIV chart) with target numbering (red) and number of shots (black)
In contrast to other test collectives, for example soldiers from other types of troops, differences in the individual shooting ability are only found at a very high level, so that we could assume non-significant differences between the individual shooting performance for our evaluation. This made it possible to assign deviations in shooting performance directly to changes in shooting conditions. At the same time, the participants were largely equally confident in using the night vision devices due to their training. The tests took place in the shooting center of the KSK in Calw. Here, the course could be implemented as an indoor experiment, which guaranteed the required constant daytime and infrared lighting levels at all times.

Fig. 3: Shooting position 1 on the course, target chart on the back wall (arrow)
When evaluating the accuracy of the hit, the homogeneity of the test group was confirmed. An average of 3 shots were placed on 3.66x3.66 cm (MD: 2.35 cm²), regardless of the task, phosphor color and target distance. The average visual performance achieved was 0.4 Snellen visual acuity (LogMAR 0.4). There was no significant difference in the passage time for the course (p = 0.89), neither between day and night vision conditions nor with regard to the phosphor color. Nor did the shooting results show a significant difference when comparing the two phosphor colors (p = 0.56).

In the subjective self-assessment there was a significant preference for the white phosphor color (p = 0.001). The shooting results were, however, highly significantly better (p = 0.00034 green or p = 0.00014 white) under night vision conditions, regardless of the phosphor color, than under daylight conditions, although the daylight results were rated highly significantly better in the subjective self-assessment (p = 0.0003).

Subjectively, the white phosphor color is most likely to be perceived and preferred as daylight. With regard to the objective fulfillment of the task, however, there were no significant differences between the two colors. The subjects performed the specified shooting tasks better under night vision conditions despite objectively significantly reduced central visual acuity. Nonetheless, daylight was preferred in the self-assessment and one's own performance was subjectively rated better than night vision. 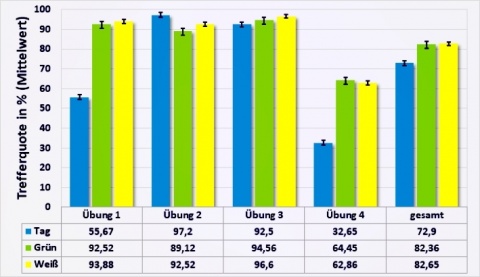 Fig. 4: Hit performance in the 4 exercises and on average; in exercise 4 the target area was significantly smaller than in exercises 1 - 3, which explains the overall lower hit rate.
This result is most likely attributable to the different target procedure. In daylight, the shooter uses the rifle's optical sights. Using an NVG, an infrared aiming laser is used which projects a target point visible to the NVG user onto the target. This means that no target optics have to be brought between the eye and the target. In addition, the entire field of vision of the night vision device is available to the shooter in this way, in which he can move the aiming laser freely, in contrast to the "sight view" during the day.

This revealed a noticeable general misjudgment of the performance, for which awareness can be created in the course of training in night vision technology in order to strengthen the users' trust in this technology: “The performance when using NVG is better than the subjective assessment , yes it is even better than in daylight conditions! "

In addition, it could be shown that the test collective has a shooting ability that makes individual fluctuations in the results largely negligible for the realistic practical test. With this homogeneous collective, further investigations on ergonomic issues, especially in connection with the respective effect on shooting performance and combat strength, can be carried out if necessary.