How can I settle in Groenland

Island life in the Arctic

What makes it so special
Aasiaat and its surrounding area is known as the "Land of a Thousand Islands" because the city is located on an island that is part of a large archipelago. And this island landscape not only influences the everyday activities of the residents, for shipping, kayaking and fishing for everyday life
but also the shaping of regional culture.

Aasiaat is a vibrant city with a growing population, a thriving economy and an open society. This is where the North Greenland Education Center is located, which is why young people from all over the region come here to attend secondary schools. The growing number of pupils and trainees gives the city a creative character, art can be found everywhere: from sculptures in the streets to the 24 paintings by Danish artist Per Kirkeby, which are exhibited in the community hall.

Aasiaat offers its visitors exemplary impressions of the Greenlandic nature, paired with an extraordinary cultural life, which offers a perfect balance between an existing infrastructure for tourists and authentic life in Greenland. 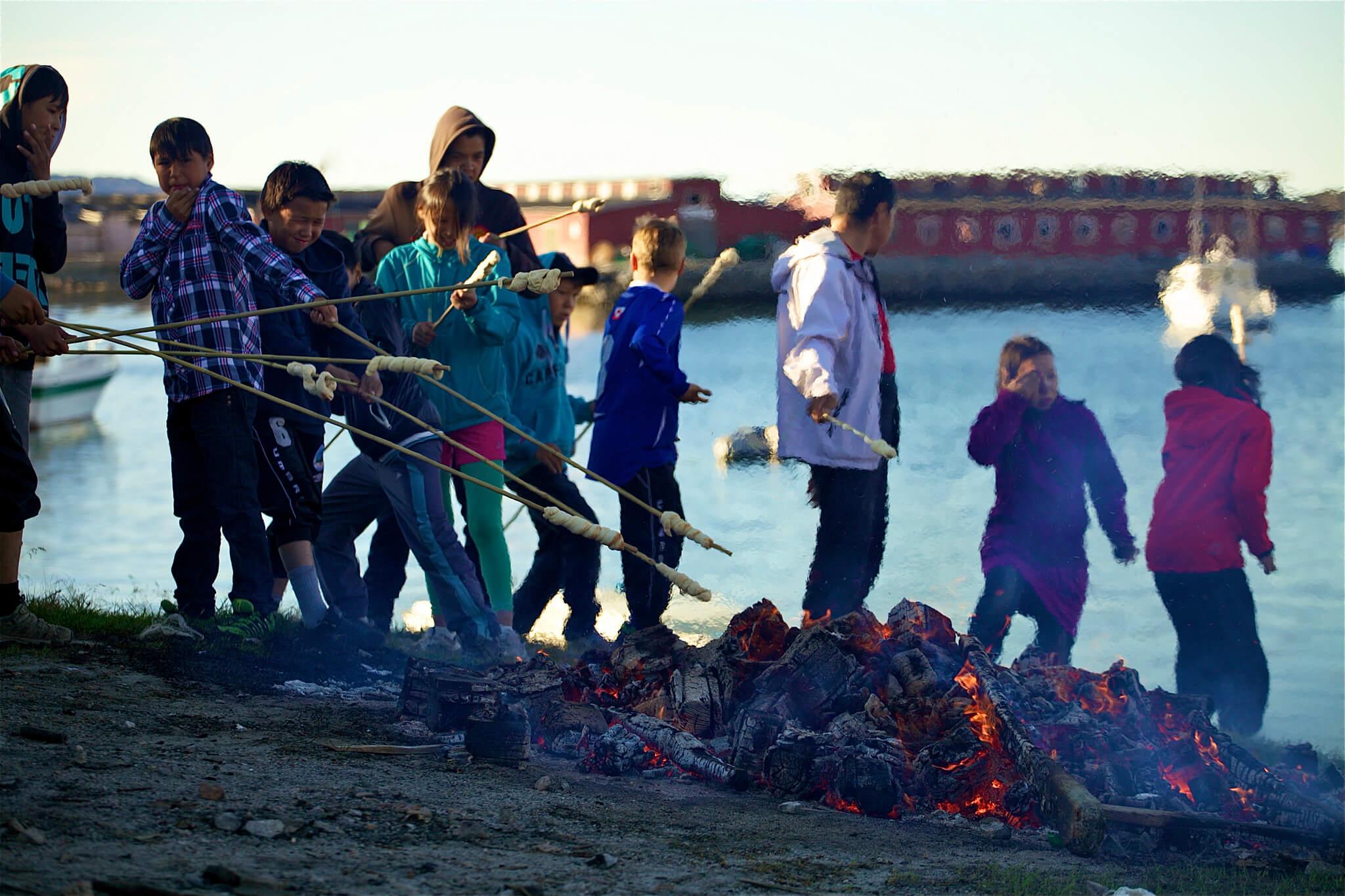 How do you get there?
Aasiaat can be reached by air or water. You can fly directly from Ilulissat or Kangerlussuaq almost every day and all year round. The coastal ferry Sarfaq Ittuk docks twice a week from late May to late August. For regional connections to other cities within Disko Bay, you can also use Disko Line boats in summer.

What is there to experience?
To experience Aasiaat authentically, it is a good idea to leave the city and take to the waterways. Aasiaat is one of the best places to go whale watching in Greenland as there are many different species to see while taking a boat
is on the move in the labyrinth of countless islands. While the sighting of whales cannot be guaranteed, the icebergs will be in your field of vision, as the numerous calving glaciers of Disko Bay carry a multitude of spectacular icebergs into the bay.

Make sure to immerse yourself in the city's vibrant culture and the many events that take place throughout the year. One of the most important events is the Aasiaat Midnight Sun Marathon, which the participants complete in the magical light of the midnight sun. The winter season also has many popular activities such as dog sledding or snowmobiling and cross-country ski tours.

Where can I stay overnight?
There are two hotels in Aasiaat - the Hotel Nattoralik and the Aasiaat Seamen’s Home, a guest house, a hostel and holiday apartments.

What makes it so special
Greenland is often characterized as the largest island in the world, although it has its own largest island, which also has its own charm. Qeqertarsuaq literally means, the big island ’and is the only town on Disko Island, this fascinating land mass with its mysteriously fertile and green landscape in the middle of a bay of icebergs.

The uniqueness of Disco Island has long been the subject of a Greenlandic legend, according to which the landscape here is said to be so lush and nutritious because it originally came from southern Greenland. According to this story, two hunters in their search for seals freed the island from its southern position and pulled it north with only their kayaks and a single child's hair. When they arrived in Disko Bay, a witch from Ilulissat spied the lush green island, which was moving further north, and cursed it so that it ran aground.

The island's terrain is impressive: from the steep basalt mountains, formed by volcanic activity 25-65 million years ago, to the Lyngmark Glacier that towers over the city. Qeqertarsuaq is really unique and cannot be compared to any other place in Greenland. 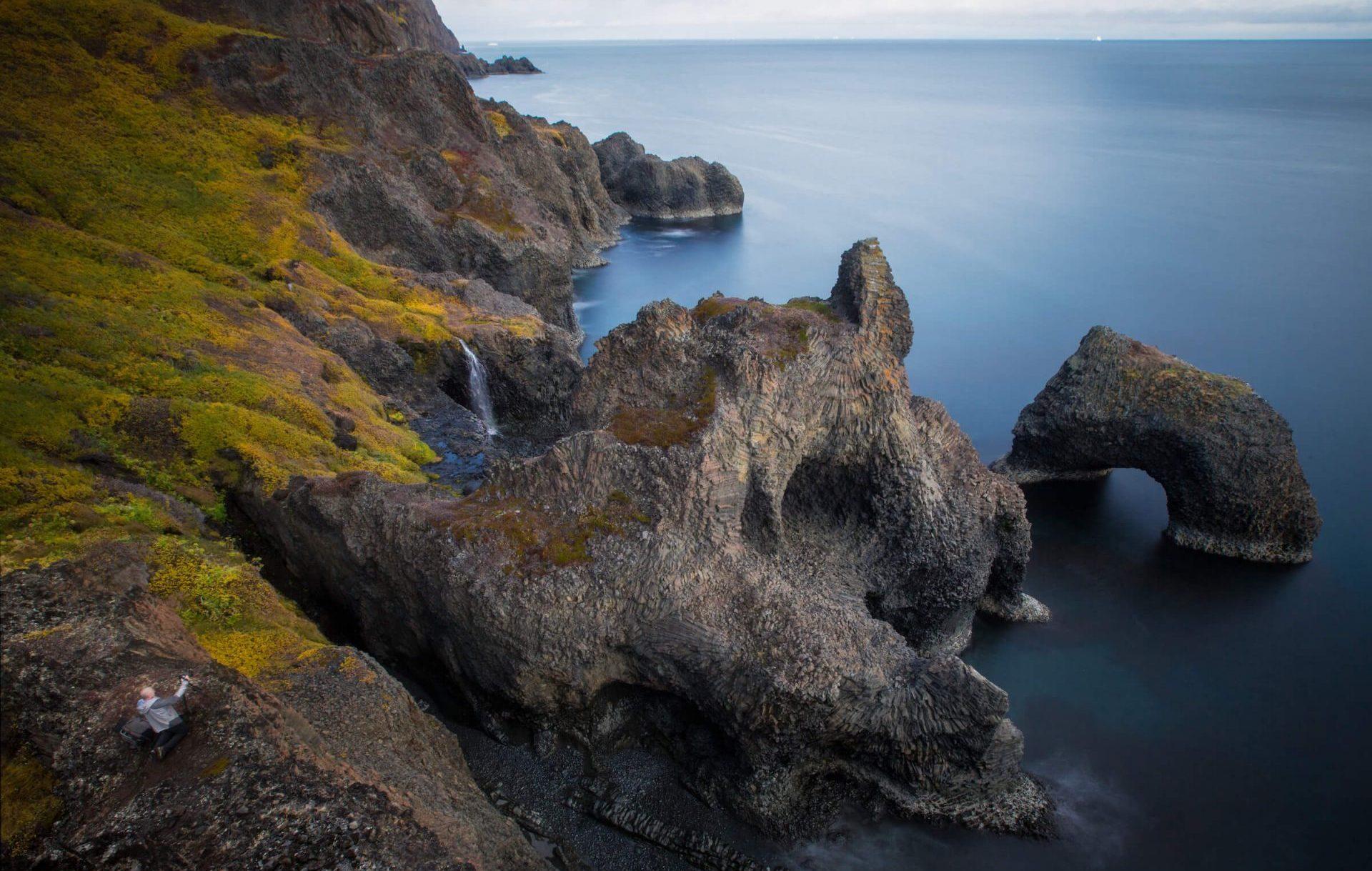 What is there to experience?
The natural wonders of Qeqertarsuaq don't stop there - the deep fjord is great for kayaking, the steep mountains for hiking, and there are even natural hot springs dotted across the island's valleys. In winter, the active lifestyle with ice fishing and trips with the dog sled or snow scooter is continued.

Where can I stay overnight?
Accommodation options in Qeqertarsuaq include hotels, glacier cabins, and private apartments for rent.

The Venice of Greenland

What makes it so special
The city of Maniitsoq was built on an archipelago that is connected by bridges. It has been declared the “Venice of Greenland” by the locals as small natural canals cut through the rocky islands and meander into the city center. And the best thing about an underrated version of Venice is that there are no crowds here!

And we're serious about the lack of crowds. Maniitsoq has about 2600 inhabitants and just outside the city there is an endless and untouched wilderness to discover. The name of the city means 'place of rough terrain' and the region can be described as hilly and unforgiving. In fact, these are the highest mountains in West Greenland, which offer some of the best heli-skiing options in the world. 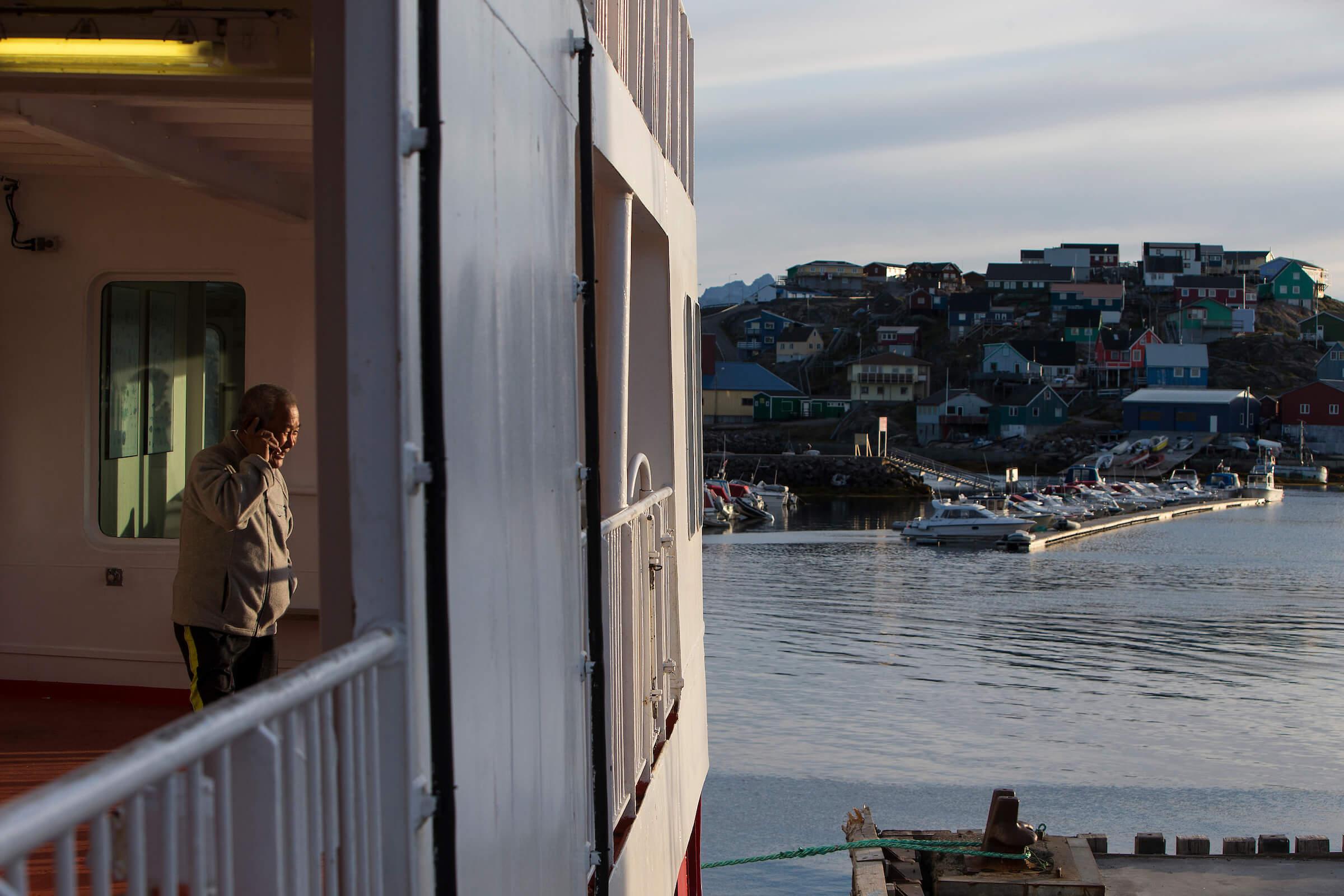 How do you get there?
Maniitsoq is halfway between Nuuk and Kangerlussuaq, which means that it can be reached by direct flight from these two international hubs. The coastal ferry Sarfaq Ittuk stops here once a week and Maniitsoq Tour Boat drives to nearby settlements and operates a regular passenger transport to Nuuk during the summer months.

Maniitsoq has an excellent reputation as a fishing destination as the two rivers to the south of the city are teeming with char. For traveling anglers there is a suitable infrastructure around the rivers, here you can find overnight accommodations in huts and guides that
know the area very well. The abundance of char in this area means that even inexperienced anglers can return home happy with a sense of achievement.

Just north of Maniitsoq, around the spectacular Eternity Fjord, you will find the best places in Greenland or even around the world for heli-skiing. Here you can sit down on the peaks of the highest mountains in West Greenland and ski down to sea level to arrive deep in the dramatic landscape of Ewigkeitsfjord. 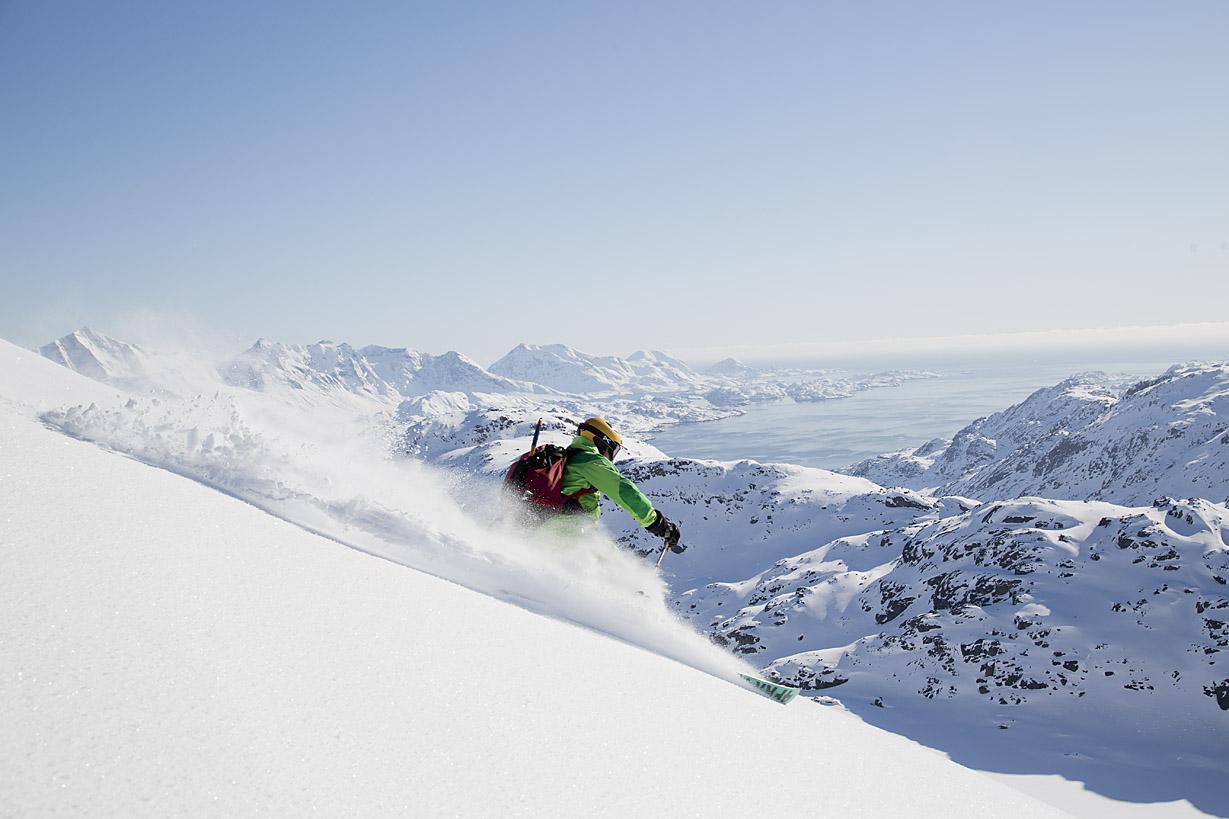 If you're more into culture, you can easily spend your time following the winding waterways of the city's hilly streets. You can also see internationally renowned art in this small town hidden on Greenland's west coast. The museum has an extensive exhibition of paintings and sculptures by local artists as well as the Danish painter Aage Gitz-Johansen, whose works interpret Greenlandic culture, legends and tales. Aka Høegh, one of the internationally best known artists in Greenland, decorated the local church together with the local leather seamstress Martha Biilman.

Where can I stay overnight?

There are two hotels in the city: Hotel Maniitsoq and Hotel Heilmann Lyberth. 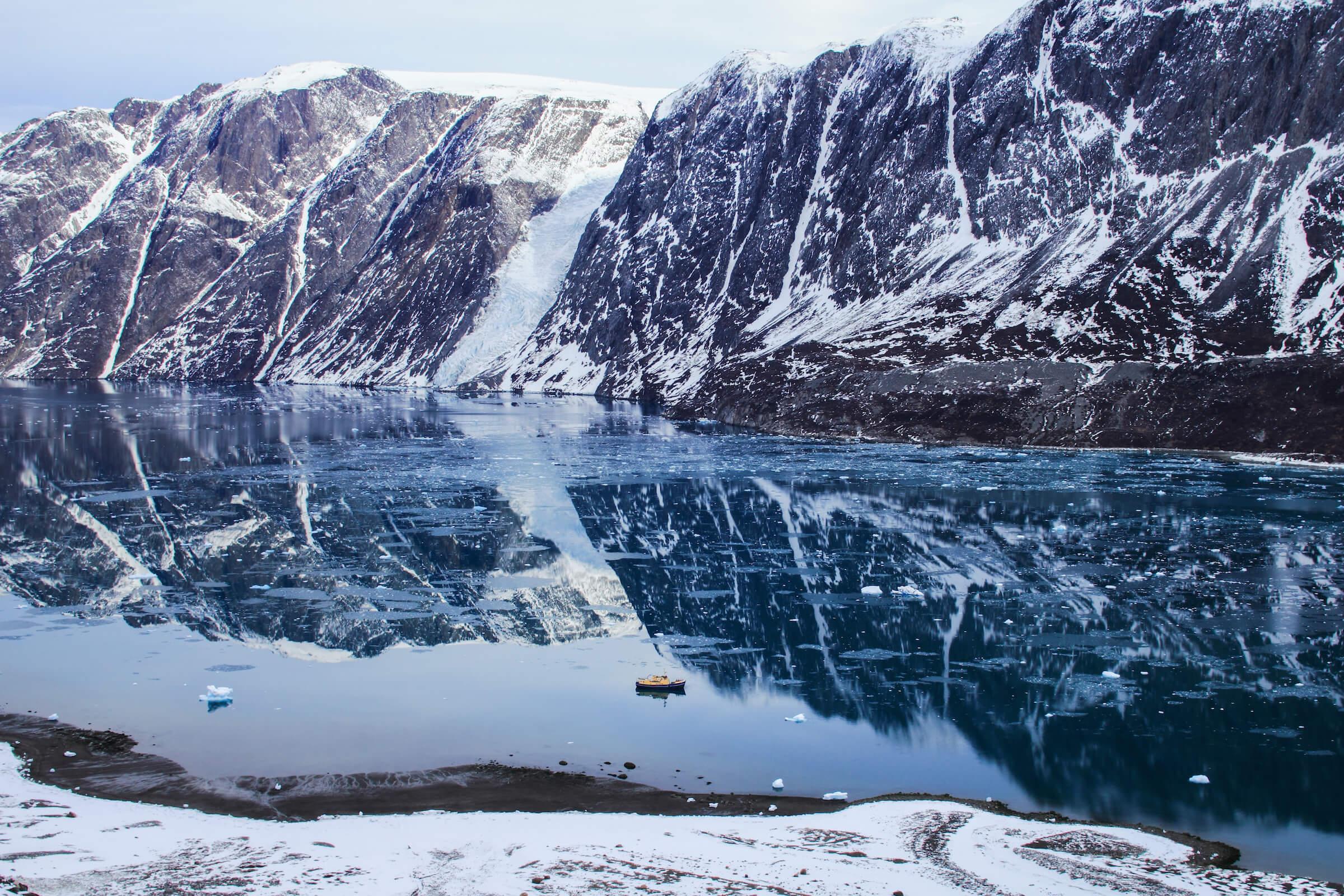 At the mouth of the fjord

What makes it so special
Like many of our underrated places, Nanortalik is located on an island deep in the winding landscape of South Greenland. There are a number of welcoming towns and settlements scattered here that are perfect for traveling by boat and sometimes even on foot. Nanortalik Island is located at the mouth of the mighty Tasermiut Fjord.

This island looks very unusual in South Greenland. Nanortalik is the southernmost town in Greenland and yet, with its steep, rugged mountains and the sea ice drifting past the town, there is nothing southern about it - these characteristics are more reminiscent of the landscape of East Greenland than of the lush green meadows of the south. 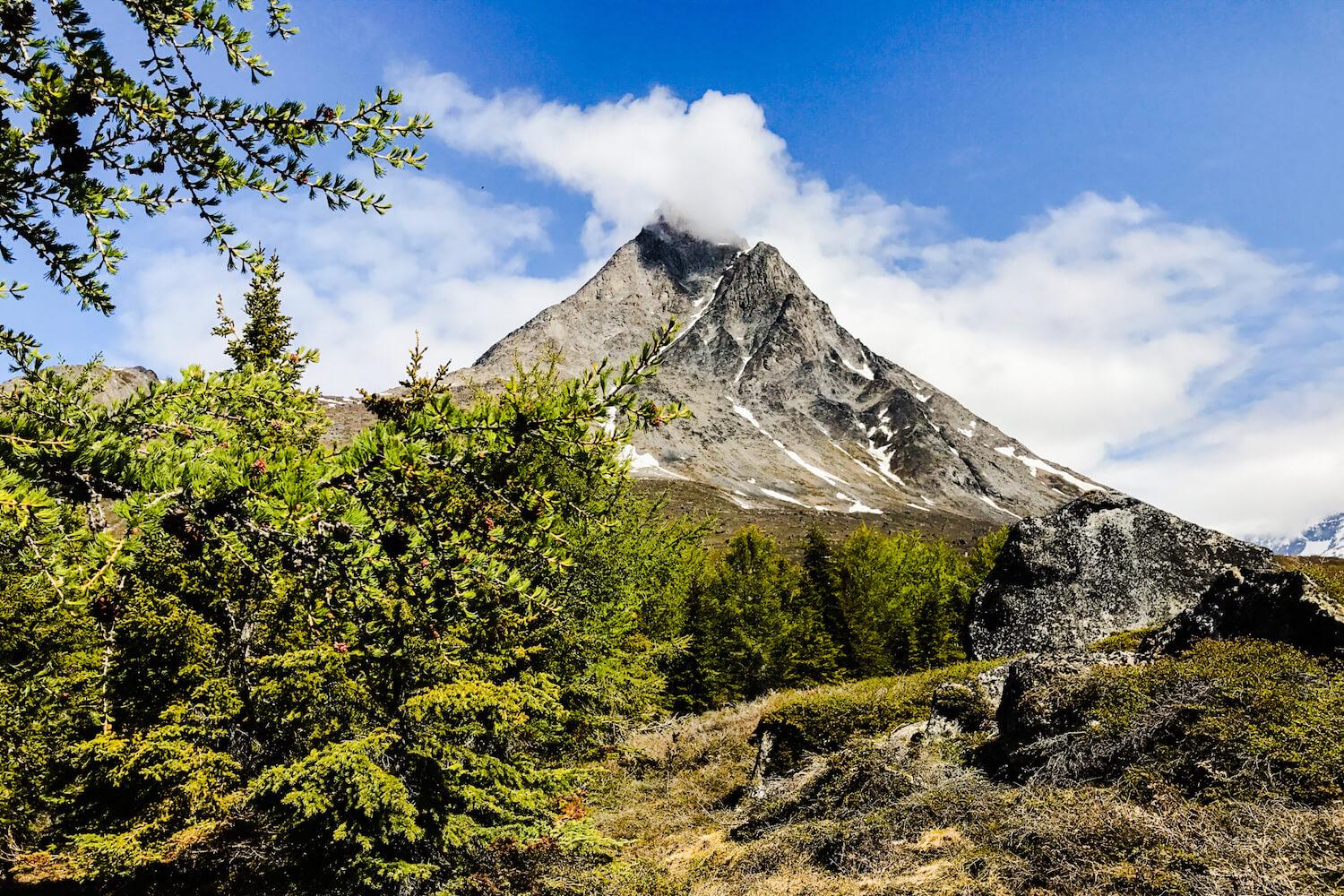 This fits in with the immigration of East Greenlanders that took place in this area in earlier times. It seems as if the East Greenlanders brought their famously warm and welcoming demeanor with them. Greenlanders say arriving at Nanortalik feels like returning to the home of childhood - even if it's your first time there.

What is there to experience?
The most popular activities in and around Nanortalik include a trip to Tasermiut Fjord, which is one of the best fjords in Greenland for trekking, climbing and kayaking.

If you are looking for underestimated discoveries in addition to underestimated travel destinations, Nanortalik has a lot to offer here too. Find out more about Greenland's only natural forest, 40 km from Nanortalik in the Qinngua Valley. Here the trees grow several meters high. This is incredible in a country with such harsh weather conditions, where it is usually too harsh for larger vegetation to grow here. 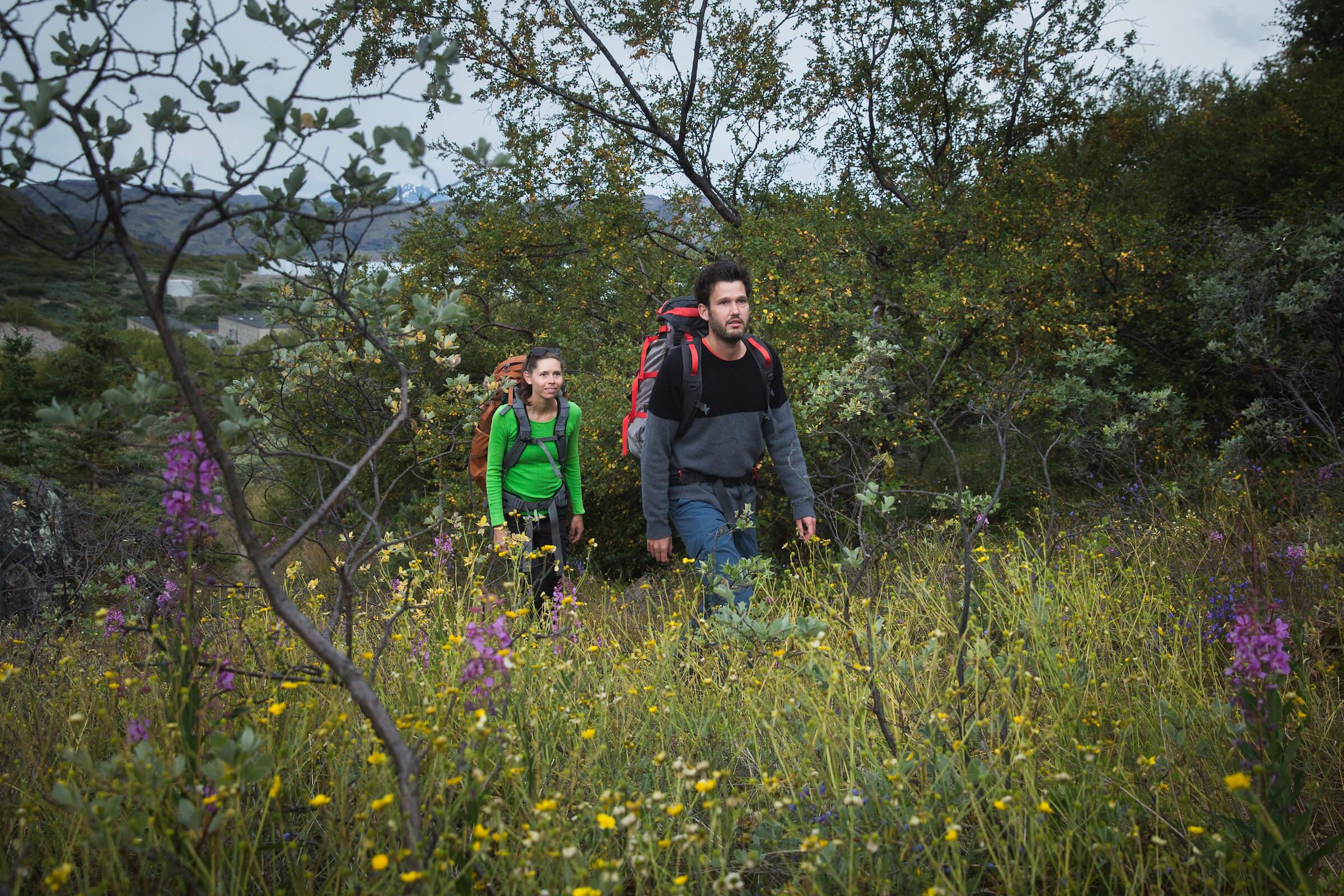 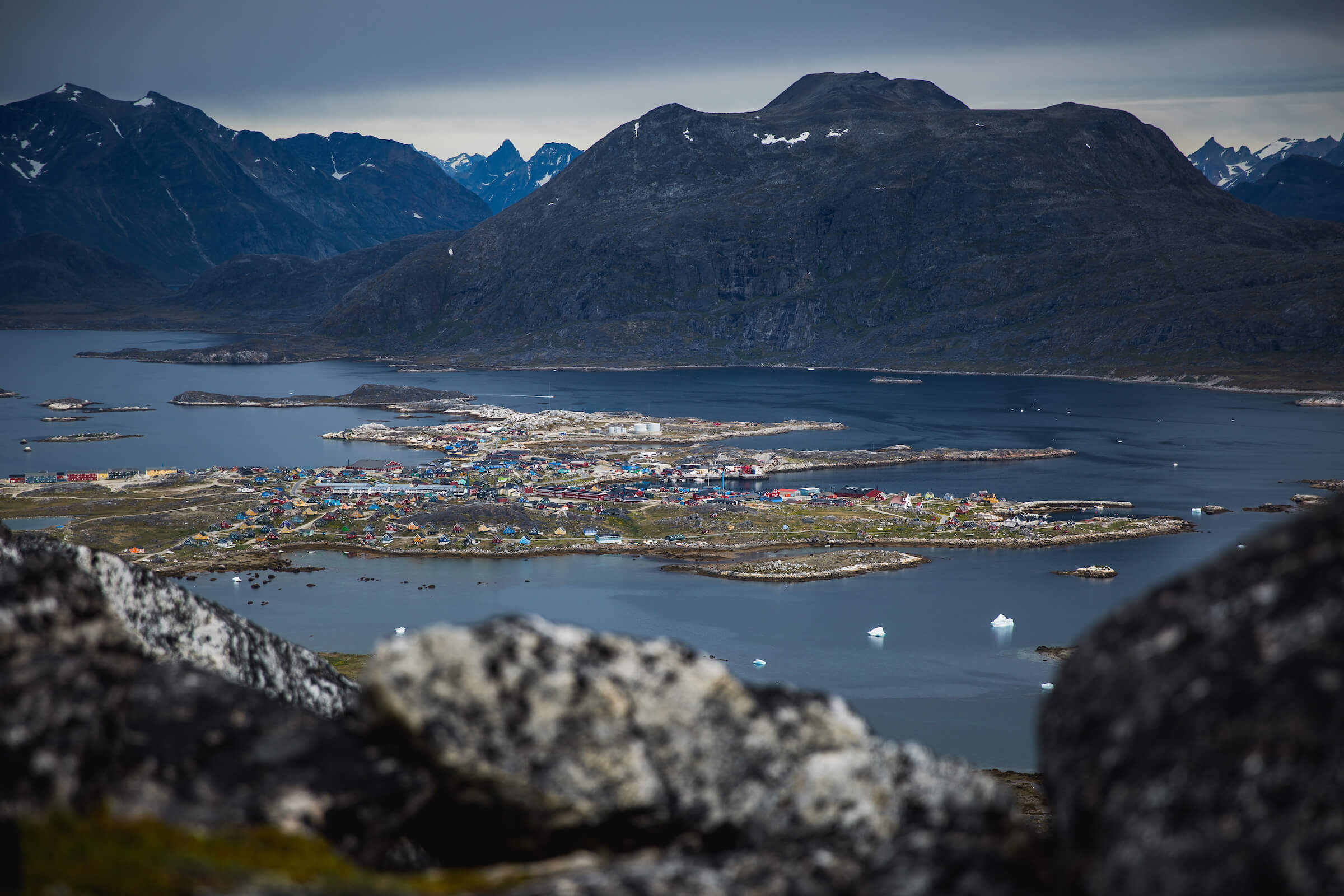 Another special feature of Nanortalik is the importance of the local choral music. As there are several choirs in the city, you can be very sure that you will get the opportunity to experience this exclusive tradition of Nanortalik when you are there.

Where can I stay overnight?
Nanortalik has a wide range of accommodation options: a hotel, a hostel, a B&B and holiday apartments.

The authentic lifestyle in a settlement

What makes it so special
Niaqornat is perhaps the most underrated of our underrated places. With only 52 human inhabitants, the dogs are supposed to represent a majority here. The settlement became known through the film "Village at the end of the world" - a documentary about the everyday efforts of a small community that lives in an actively changing society and is increasingly distancing itself from the traditional way of life.

Trade, and thus the survival of the Niaqornat community, depends almost entirely on fishing, seal hunting, whaling and hunting on land. In this way, Niaqornat represents the authentic lifestyle of a Greenlandic settlement - the inhabitants actually live on their land and carry Greenlandic hunting culture over into modern times.

Please remember that traveling to the remote parts of Greenland is particularly prone to delays, cancellations and weather-related disruptions. Don't rely on your trip to Niaqornat to go exactly according to plan - although transport companies will do their best to get you to your destination on time.

What is there to experience?
Niaqornat is truly one of the best places in Greenland to authentically experience the local culture. If immersion in a different culture is exactly your thing then this is your dream travel destination. The residents are so cut off from the rest of the world that the settlement has no sewer system - there are only dry toilets here! So slow down, get to know the locals and discover everyday life in a truly cohesive community.

You can also leave the settlement to go on hikes, fishing trips or trophy hunts. The wildlife in this area is so diverse that the Greenland Institute of Natural Resources has a facility in the settlement to help
to explore the many species.

Where can I stay overnight?
Niaqornat has only recently seen the beginnings of tourism - above all through the film that drew international attention to the settlement in 2012. There are no official tourism providers in the settlement. Accommodation and excursion options
exist, but they should be organized privately.