Hundreds of thousands are demanding temple building in Ayodhya

Hundreds of thousands of Hindus took to the streets on Sunday in Ayodhya, northern India, to build a temple on the former site of a mosque. The mosque was destroyed by fanatical Hindus in 1992.

This led to nationwide riots between Hindus and Muslims with more than 2,000 dead. In Ayodhya there was once a temple where the Hindu god Rama is said to have seen the light of day. Islamic conquerors built a mosque on the site, which was torn down 26 years ago. Now the question arises again, who owns this place.

The police were on Sunday with a large contingent in the city near Feizabad in the state of Uttar Pradesh on duty. The demonstration ended peacefully, the operations management announced in the evening. 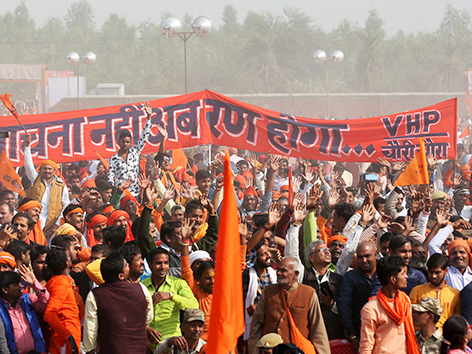 About 200,000 people demonstrated for the construction of a Hindu temple

The nationalist Hindu movement Vishwa Hindu Parishad (World Indurat) called for the action on Sunday. She wanted to build pressure to get the temple built before the next elections in May 2019. She spoke of 200,000 participants. The area is considered by the Hindus to be the birthplace of the god incarnation Rama.

Other hardline Hindu groups such as Shiv Sena also joined the rally. The building of the temple is an election promise made by India's ruling BJP, which is also the government in Uttar Pradesh. "Put up a gun, build the temple, we will support you, but don't play with the feelings of Hindus," said Uddhav Thackeray, head of Shiv Sena, journalists. India is predominantly Hindu, with around 14 percent of the population being Muslim.

Whether the temple is actually built is now in the hands of the country's Supreme Court. The next hearing is scheduled for January 2019. A Rama temple had already stood at the disputed site. It was destroyed by Muslim conquerors who built the Babri Mosque in the 16th century. There is currently a shrine for pilgrims there, which cannot be perceived as a temple from the outside.

Those who had arrived were only allowed to enter the shrine in small groups on Sunday, as a high-ranking police officer said. TV channels showed pictures of thousands of people, many of them dressed in saffron yellow, singing.

The government of Uttar Pradesh also announced on Sunday that its plans to build a 221-meter-high bronze statue of Rama had been approved by the Indian government. Where exactly it should be and who is financing it remained unclear.