Is cable TV better than Netflix

In many regions, the old analog television is currently being switched off via cable. Many previous customers are wondering whether they should cancel the cable connection and switch to an alternative.

In fact, there is also the option of watching TV free of charge without a monthly fee, for example via satellite. But not everyone has the opportunity to set up an antenna. Either because there is no unobstructed view of the satellite or the landlord does not allow it. Another possibility would be the digital terrestrial antenna television DVB-T2. But even here there is not reception everywhere in Germany, in many places there are no private channels and where they can be received, a subscription to the freenet TV bouquet is required. IPTV is also not available everywhere as an alternative. So the only alternative is classic streaming via the Internet. But can web TV already provide a full replacement for the cable connection if the customer wants to continue watching TV on his large screen in the living room? 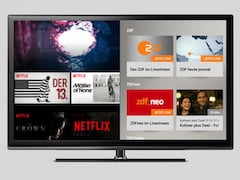 Internet TV vs. Cable TV: Which Performs Better?
Photos: CLIPAREA-fotolia.com/Netflix/ZDF, Montage: teltarif.de First of all: The Internet providers cite a bandwidth of 6 Mbit / s as the minimum requirement for TV transmission in standard quality. For the reception of HDTV, however, a bandwidth of at least 16 Mbit / s should be available. In the country it could look bad with television over the Internet as an alternative to cable.

A customer currently pays between 15 and 25 euros per month on average when he watches television via cable. With the largest German cable network operator Vodafone (formerly: Kabel Deutschland) he would get a large digital TV offer of 100 TV channels in SD and almost 50 in HD for just 9.99 euros a month (from the 13th month 14.99 euros) , including almost 100 free and available at no additional cost. A provision fee of around 50 euros is still due. We used this package (GigaTV Cable) as a basis for the comparison with Internet TV providers.

In theory, there is even the option of watching TV for free on the large screen in the living room via the Internet, apart of course from the radio license fee that every household has to pay. Anyone who lives in the broadcast area of ​​the digital terrestrial aerial television DVB-T2 HD and receives the bouquet of the ZDF can, in addition to the unencrypted offer of over 20 public channels in HD as well as a few private channels, also many Internet-based programs such as MTV, Comedy Central , N24 documentation or see TLC. Prerequisite: the television or DVB-T2 receiver is certified to receive the additional service freenet TV Connect.

Disadvantage: The big German private broadcasters like RTL, Sat.1, Pro7 or Vox are missing. In addition, the picture quality of the streams from freenet TV Connect leaves a lot to be desired. This is particularly noticeable in televisions with larger screen sizes from 37 inches. freenet TV Connect is therefore ideally suited as an additional offer for second TVs, i.e. where the aerial television DVB-T2 HD is also popular.

Anyone who owns a Smart TV from Samsung or a device with Android TV (for example, TVs from Sony from 2015, Sharp and Philips) can theoretically watch TV for free without an antenna, cable or satellite connection. For this it is simply necessary to open the TV app of the TV portal Zattoo in the Smart TV portal and log in with the Zattoo login data. Customers get over 75 channels for free in the app, but only six in HD such as ARD Das Erste, ZDF or arte.

Alternatively, Zattoo can also be streamed to the big screen from a smartphone or tablet via Google Chromecast, Amazon Fire TV or Apple TV.

If you want the entire selection of channels, including the channels from RTL and ProSiebenSat.1, a recording function and more than 50 channels in HD as well as advertising-free switching, you need Zattoo Premium. After 30 days of free use, 9.99 euros are due for this. That would be exactly the price for the first 12 months of the digital TV package from the cable network operator Vodafone and thus at least in the first year no cost gain compared to the cable connection, with fewer programs on offer.

Zattoo's competitor Magine TV also has a free basic package with over 30 channels, 15 of which are in HD. But even with this TV portal, the most popular German private channels such as RTL or Sat.1 are not included in the free offer. These are only available in the Pay packages, which cost from 10 euros per month after a one-month free phase.

Compared to Zattoo, Magine TV is not available directly as an app on smart TVs, but the TV programs can be streamed to the big screen via Google Chromecast, Amazon Fire TV or Apple TV via app from smartphone or tablet. The Magine TV app is also available on Playstation 4.

Internet TV portal Zattoo on a smart TV
Image: Zattoo Other Internet TV providers are waipu.tv and Diveo [link removed] (M7 Germany). However, Diveo only offers paid packages. waipu.tv also has a free service and the paid package is a little cheaper than the digital TV package from Vodafone that we used as an example. After a one-month free phase, the "Comfort" bouquet costs EUR 4.95 per month and includes 78 TV channels in SD quality. If you want to watch TV in HD quality, you need the "Perfect" package. There are 90 TV channels, 59 of them in HD quality at a price of 9.99 euros after a one-month free trial. Pay TV channels are also included in the "Perfect" package, but these may later cost 10 euros extra.

A still quite new provider is Diveo, which was launched this year and is now also available directly as an app on smart TVs from LG and Samsung. Depending on the package booked, Diveo offers up to 70 channels in high definition HD quality and also access to many Internet-based services such as media libraries or video portals. The basic package with 50 HD channels, access to media libraries and apps as well as 10 hours of recording capacity costs 7.90 euros per month. This means that Diveo is a little cheaper than our Vodafone comparison offer, but it offers fewer TV offers.

Is it worth terminating the cable connection?

Our conclusion: there are already internet-based alternatives to cable connections. But Zattoo, Magine TV, Diveo and Co. score primarily with mobile use on smartphones or tablets. Since the cable network operators offer interesting and above all inexpensive digital TV bouquets, also with many programs in HD, the price difference to the Internet TV providers is often only marginal. Therefore, the Internet TV portals are no reason to terminate the existing cable connection.

It's actually the other way around: the cable providers score points with attractive triple-play offers, i.e. in addition to TV, internet and telephony. The question arises as to whether it would make sense to terminate the contract with the previous telephone or Internet provider instead of the cable connection in order to save costs. This question will soon be dealt with in another guide.