What was the purchase of Siebenbuergen

When Ceaușescu "sold" the Romanian Germans

Gunfire echoed through the streets of the Romanian city of Sibiu. Shortly before Christmas 1989, many Romanians rose up against their dictator Nicolae Ceauşescu and his tyranny. Insurgent soldiers fought against the men of the hated secret service "Securitate". Over 100 people died in the Transylvanian city alone. The revolutionaries prevailed in the end - Ceaușescu was overthrown. This also opened the Iron Curtain for the people of Romania, just a few weeks after the fall of the Berlin Wall. The Germans in Romania could also breathe a sigh of relief. Like all Romanians, the dictator had kept them imprisoned in Romania, impoverished by mismanagement. Before his fall, he had the Federal Republic of Germany pay dearly for her departure. 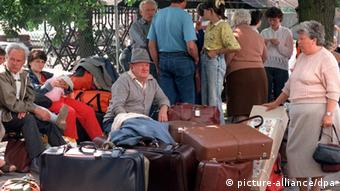 After the fall of the dictatorship in 1990, many Romanian Germans left their homeland and went to Germany

Ceaușescu is said to have jeered that "oil, Germans and Jews are Romania's most important export items". After his fall, the Romanian Germans were also able to travel freely - and many of them left the country forever. Sibiu, which had been known for many centuries under the German name Hermannstadt, lost a large part of its German inhabitants as a result. In 1977 around 25,000 Romanian Germans lived in the city, in 1992 there were fewer than 6,000 - and the trend is falling. The city was once a flourishing center of the Transylvanian Saxons.

Wild horsemen made Transylvania unsafe in the early Middle Ages. With a lot of effort the Hungarian kings were able to pacify the area. People soon poured in from the Rhine, from Alsace and Lorraine, from Flanders and Luxembourg, but also from Bavaria and Saxony, to colonize the country. One of them, a certain Hermann, is said to have founded a village in a favorable location in the middle of the 11th century: Sibiu. Signs today also refer to the German name of the city

As Transylvanian Saxons, these settlers were soon known in their new homeland. They developed their own culture, received many privileges from the crown - and set themselves apart from their non-German neighbors. In the course of the centuries, Germans who were considered hardworking and hardworking also immigrated to other parts of today's Romania: The Zipser, the Banat Swabians, the Bukowina Germans, the Regater Germans and a few others.

In the multi-ethnic state that Romania had become after the end of the First World War at the latest, the Transylvanian Saxons tried to preserve their old privileged role. In Sibiu they were meanwhile in the minority. Over 30,000 Romanians lived there in 1941, but only just under 23,000 Germans. Many Transylvanian Saxons also saw a way out in the growing strength of National Socialism in Germany and its ideologues of a superior German race. Especially since Hitler acted as the patron saint of all Germans abroad. The costume of the Transylvanian Saxons

Conducted from Berlin, the Transylvanian Saxons were "brought into line". The Nazi ideology fell on fertile ground here. Many Transylvanian Saxons fought for the Waffen SS in World War II. This was to take bitter revenge later. When the victorious Red Army marched in, tens of thousands of Romanian Germans, men and women, were deported to the Soviet Union.

In Romania, too, which soon became socialist, the roughly half a million Romanian Germans were collectively regarded as "traitors". Only gradually were they granted rights again - of course only if they showed themselves to be good communists. With verses like "The misery is long gone, we thank our party!" they had to "say thank you". Many Romanian Germans wanted to leave the country, which Nicolae Ceauşescu ruled with an iron hand, for Germany. 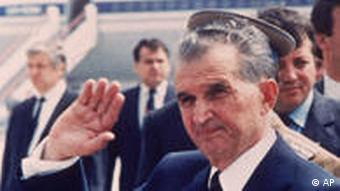 The dictator sensed a deal. Since 1968 the German lawyer Heinz-Günther Hüsch has been negotiating with the "Securitate" on behalf of the federal government about a ransom from Romanian Germans - all top secret. Amounts of up to around 8,000 DM per person changed hands - over 200,000 people were ransomed by the federal government in this way.

In a similar way, Israel had to buy the emigration of the Romanian Jews. The ransom of the Romanian Germans did not end until December 1989 when shots rang out in Sibiu. Nicolae Ceauşescu and his wife were shot dead on December 25th. The Romanian Germans were free - the dam was broken. Today there are only less than 40,000 Romanian Germans living in the country, around 1,500 of them in Sibiu / Hermannstadt. One of them has been mayor there for more than twelve years - elected by the Romanian majority. A symbol that in the long-divided, multi-ethnic state of Romania, traditional national borders can be overcome. 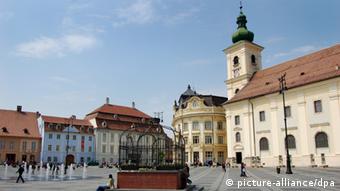 In 2007 Sibiu / Hermannstadt was European Capital of Culture

The "Democratic Forum of Germans in Romania" represents the rights of the German minority. It was founded just a few days after the dictator was overthrown. Sibiu is still a center of the Transylvanian Saxons: In the culture and meeting center Friedrich Teutsch [http://www.teutsch.ro/] one collects the testimonies of the many abandoned communities of the Transylvanian Saxons.