What are your 10 laws of writing

(for children and adolescents from 10-14 years)

Do you just want to write for fun? Regardless of the rules of writing and writing rules? Do you want to find your topic, your story? Then come to the writing workshop! We do games and exercises to heat up the pens and collect ideas for stories, poems and other texts.

My trip to Mars

One night I dreamed of Mars, but when I woke up I was actually on Mars. I was in a barren, sandy landscape. I saw some dunes and a sun that heated the whole landscape. It was unbearable. Water wasn't in sight either. My throat was already dry as sand and I saw some mirages that showed me a nice pool with a few servants. Unfortunately, however, I thought about it and it occurred to me that I can't breathe at all. I fainted. Suddenly something trusting shook me. At first I thought it was my rabbit but it was my mother who was standing in my room.

Community story of the love between cupboard and bottle 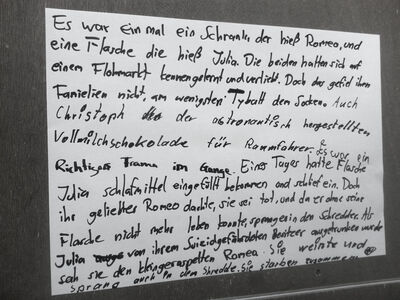 I write. Often. With pleasure. Now. I would love to write books, but no matter how complex my ideas are, it will always be too short. I don't care if I write, I can dream. When I write something it feels like it deserves the Nobel Prize for Literature, but when I read it again it sometimes feels like total rubbish. But then I just imagine someone else wrote that, and then it works. Then it's usually pretty cool. And now I miss the transition to “The Boss Hoss”. Why did I circle that in the first place? Probably because I got a catchy tune from their new song. That's kind of stupid, but the chorus is awesome! I write and it occurs to me that this text is the most senseless and incoherent thing that I have ever written. And before I document any spiritual digressions on Orlando Bloom, Pirates of the Caribbean, or whatever, I better stop writing now.

Community story of the love of the bucket and tie 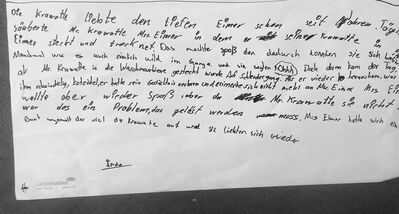 One evening I went camping with my parents. That evening I took a particularly close look at the stars and imagined what it would be like up there. With this thought I fell asleep.
Now I woke up. Everything was dark. I wondered whether I should feel for the tent opening or whether I should stay where I was. I chose to stay. Now a light went on, I thought it was my mother or my father. Strange characters came up to me. I asked: “Who are you? Where are you from? "They answered or it just looked like that. I didn't understand them. They grabbed my arm. At first I was afraid, but then more figures came, but they threw flowers and others danced and carried cake. I was happy but also sad because my parents weren't there. After 10 minutes I was crowned queen and learned the strange language of the inhabitants of Mars. But whether it was a dream or not I'll tell you next time.

Mars
Atchoo! I open my eyes and sit up. I just want to yawn heartily when a pinch of red sand tickles my nose again and I have to sneeze again. Where am I? I want to get an overview, look around for details and clues, but there is nothing here. Nothing but red, dry sand. I get up and take a few steps, which is very difficult for me. I sink into the sand and the heat is unbearable. I go and go, I've lost track of time. On and on, the red nothing threatens to devour me. There is no way out here. I do not have any strength any more. I am just about to let myself fall into the sand, exhausted, and surrender to the sweet redemption of death, so I listen up. A hiss behind me. Quietly, but in the endless, empty space you can't miss it. A small snake crawls up to me and hisses again. “Come with me!” She seems to be saying. The little living being gives me new hope, and hope gives me strength. I get up and follow the line. Follow her over the last hill and then I see it: a gate to his city. White houses, green trees and colorful flowers in their gardens. The water in the rivers shimmers blue and clear and high mountains stand out against the horizon. Am i in heaven No i'm alive I can feel that when I step through the gate and the people greet me in a friendly way. A mild wind is blowing around my nose. I feel alive I will stay here.
Paula Schleifenbaum, 13

At the employment office
It was noon on Friday and the job center was completely empty. Because everything there was white and very sparsely furnished, the void seemed even emptier. Mr Müller had just had his lunch break and, bored, pushed himself in for a pizza. He was so damn bored. In fact, he was so bored that his head sank on the desk and he fell soundly asleep. So it was no wonder that he was scared to death when a woman dressed in flashy colors ripped open the door and burst into the white emptiness of the employment office. "Oops! My goodness! ”He thought to himself. It had happened quite a few times lately that he fell asleep while working. Just because nothing was going on here! (That his falling asleep might have to do with the fact that he liked to party all night, of course, did not occur to Mr. Müller) He looked at the clock. Five more hours of service! He could never take it! "Are you looking for a job?" He turned to the woman. “How about a permanent position at the employment office?” He asked. "Uh, actually ...", she began, but she got no further, because Mr. Müller had grabbed her by the shoulders, pushed her behind the desk and pushed her onto the chair. "And I, I'm going fishing now!", He explained to the completely perplexed lady and pulled the door shut behind him.