What is markup in HTML

The term markup is of English origin and means something like "text markup". Originally, typesetters needed the markups as instructions in order to be able to place a print correctly. In the course of digitization, however, there was a further development of typography, so that the short text markups became complex instructions. These markups are used in electronic documents to structure the content of a text, for example through different formatting and hierarchy levels. In some cases, the markup also describes the exact process that is required to correctly interpret and display the data, as is the case with LaTeX documents, for example. To implement the markup, certain structuring elements, the so-called markup tags, are used. These tags are standardized within a markup language. The best-known markup languages ​​include HTML (Hypertext Markup Language) and XML (Extensible Markup Language), which play an important role, particularly in the context of the World Wide Web.

In addition to the actual content, a digital document, such as a Word or HTML file, also contains other elements, which are known as tags or markup elements. These markup elements are used to indicate certain properties that are relevant for the formatting and structuring of the content. They can be used to mark either individual words and sentences or entire sections of text. By using these elements, it is possible in various markup languages ​​to provide content with meta information in order to explicitly regulate the representation, structure and formatting or to pass on instructions for further processing to the responsible computer program. For example, as the application responsible for HTML documents, a web browser knows exactly how to properly structure and format the source code of a website for display. A web browser is able to interpret the markup languages ​​HTML and CSS and to ensure that web documents follow a uniform formatting. For this, however, uniform standards are necessary, which act as a basis for the respective markup language. For example, HTML is based on XML, which in turn is based on the concept of SGML.

These are pure description languages. The most popular markup languages ​​in this category are HTML and XML. The descriptive markup language HTML takes on a particularly important role nowadays, as it is used to structure web documents on the World Wide Web. The Hypertext Markup Language consists of HTML tags that can be applied to text elements in order to give them a different meaning, to structure a web document in a meaningful way or to incorporate images and videos.

Example of a simple HTML document:

This is a descriptive data description format that is responsible for the correct output of a digital document on an output device such as a screen or printer. In contrast to descriptive markup languages, procedural markup languages ​​can be enriched with certain procedural elements. Procedural elements are to be understood as tasks or tasks that exercise a specific function in the context of the digital document. The best-known representatives of this category include TeX as a typesetting system and the two macro packages LaTeX and ConTeXt.

Example of a simple LaTeX document:

Markup languages ​​play an important role in search engine optimization (SEO). A web document can contain certain markup elements that can have a significant impact on SEO. These elements are so-called meta data, which forward important information, such as the meta title or the meta description, to search engines. Search engines are able to read out this information and use it to analyze and classify the website. The hierarchy and structure of the content of a website is also defined through the use of certain HTML elements. These structures are also analyzed by search engine crawlers and are important in the context of search engine optimization (SEO), because clearly structured headings enable the crawlers to better understand and classify the content of the website, which may be rewarded with a better ranking in the search results.

In order to better structure content on websites and make it more SEO-friendly, website owners can use a variety of other options in addition to HTML. One of these options is the Schema.org web portal, which provides a uniform markup language for structuring data. Schema.org was developed in cooperation with the major search engine operators Google, Bing, Yahoo and Yandex to give webmasters the opportunity to structure and label content consistently on their websites so that they can be more easily recognized and processed by the search engines. For example, people, events, opening times, reviews or recipes can be marked as such. This information is then used by the search engines to generate rich snippets: 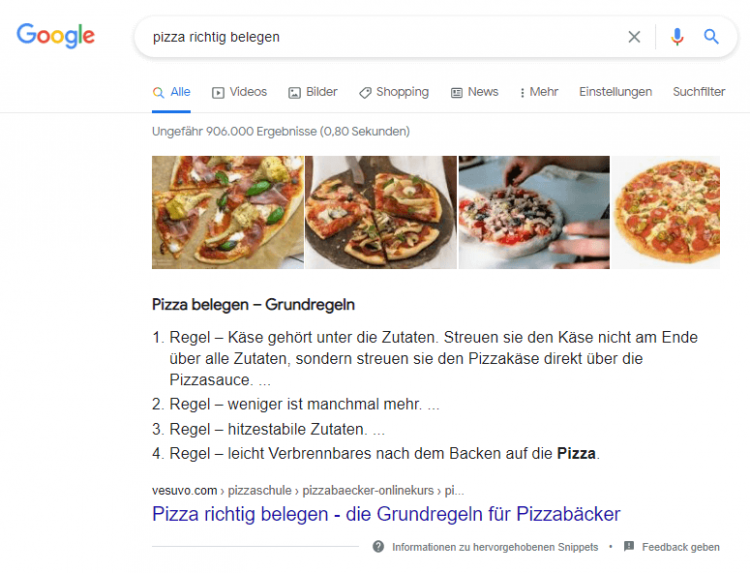 Screenshot with HowTo in the SERPs of google.de

The correct implementation of this standardized markup language has numerous advantages. On the one hand, page owners no longer have to mark elements for multiple search engines, and on the other hand, the better markup helps search engines to display more relevant search results.

To quote the article, just copy this link:
https://www.seobility.net/de/wiki/Markup
<?