Under each listed region is one or more of the following:

Militant organizations are also classified for movements that are one De facto- Establish a state or occupy territories. 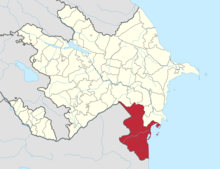 Map of the Autonomous Republic of Talysh-Mughan

Many current separatist movements in China arise from the country's ethnic problems. Some of the forces that caused these ethnic problems include history, nationalism, economic and political disparity, religion, and other factors. China historically has had tensions between the majority of the Han and other ethnic groups, particularly in rural and border areas. Historically, other ruling ethnic groups, such as the Manchu of the early Qing Dynasty, had racist problems as well. Ethnic tensions have led to incidents in the country such as the Urumqi Riots in July 2009.

During the Qing Dynasty, the European powers (and Japan) acquired treaty ports and concessions in cities in China through unequal treaties. Most of these were returned to China in the early to mid-20th century, although Hong Kong and Macau were both colonies of the United Kingdom and Portugal, respectively, until the 1990s. After their return to China, both were organized as special administrative regions with a certain degree of autonomy in their administrations. However, according to the present agreements, both regions will be fully integrated into China by the end of the 2040s. The future loss of autonomy has caused the growth of separatist movements, particularly in Hong Kong, as seen during the 2019-20 Hong Kong protests.

Although Macau is a special administrative region, unlike Hong Kong, it has few significant active independence or separatist movements. This is usually attributed to Macau's reliance on mainland China tourism, extremely high GDP per capita, and historic support for unification with China, as was the case with the 12-3 incident, for example.

Taiwan is not on this list as it is not governed by the People's Republic of China. Taiwan is fully recognized by 15 members of the United Nations, while others have informal relationships.

In 1997 the Hong Kong Colony was retroceded to China, leading to the creation of the Hong Kong Special Administrative Region. Under the commonly agreed Hong Kong Basic Law, the Hong Kong Special Administrative Region would maintain its autonomy for 50 years until 2047. After that, the region would take full control of China. Hong Kong's autonomy and its end in 2047 have sparked disputes between those who support the Chinese government and those who don't. A particular point of contention in recent years has been the structure of the Hong Kong government, in which the director general is appointed by the Chinese government while local elections are held directly.

The Hong Kong Extradition Act was proposed in 2019, sparking protests across Hong Kong. During the protests that followed, the pro-democracy camp received a small amount of general support alongside the Hong Kong independence movement. Many of the anti-government groups supported localism and universal suffrage in all Hong Kong elections. In May 2020, the National People's Congress of China passed a decision on Hong Kong's national security legislation making "secession" and "subversion" illegal. This move has made calls for independence now illegal as a result of the new decision, although some are still calling for independence despite the changes in the law. In Hong Kong there is general support for the pro-democracy camp, although the adoption of the decision by the NPC has made protesting and organizing more difficult.

According to Radio Free Asia, the Shanghai National Party is a political party that was formed to support the independence of the city of Shanghai. The group was founded in New York City in 2018 with He Anquan as its leader. The group allegedly recognizes the unification of China in 256 BC. Not on and is inspired by the independence movement in Hong Kong. According to some Chinese dissidents, the group's goal is "not realistic".

Tibet was a protectorate controlled by the Qing Dynasty from around 1720 until its collapse. In 1911-12, when the Xinhai Revolution took place, Tibet regained its sovereignty. In 1951, after the Chinese Communist Party won the Chinese Civil War, Tibet was annexed to China following a military expedition that was then confirmed by the Seventeen Point Agreement. Together with the Dalai Lama and other important personalities, the Central Tibetan Government was formed in 1959 as a government-in-exile for Tibet in India. Within Tibet there have been various demands for autonomy and independence over the years, which the Chinese government has rejected. Calls for autonomy and / or independence have manifested themselves through non-confrontational means such as self-immolation, although confrontations such as that of Chushi Gangdruk did occur in the 1950s to 1970s.

Xinjiang has been the scene of several Uighur movements and states over the years, particularly in the 20th century with the First East Turkestan Republic and the Second East Turkestan Republic backed by the Soviet Union. In Xinjiang today, some Uyghurs and other ethnic groups support the region's independence due to alleged religious, cultural and social restrictions. The East Turkestan independence movement supports the creation of a secular republic by nonviolent means. The World Uyghur Congress represents Xinjiang in the UNPO and is one of the largest groups supporting the region's independence. The Chinese government claims that all movements that support Xinjiang independence are terrorist or separatist groups.

A smaller movement in the region is the Turkestan Islamic Party, whose goal is the creation of an Islamic state through violence and which is mainly active in China, Syria and Afghanistan. The Turkestan Islamic Party is not part of an international organization and is viewed as a terrorist organization by China, the United Kingdom, the United Nations and the European Union, among others. The United States recognized the TIP as a terrorist organization from 2003 to 2020 when it was delisted. 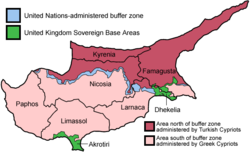 The northeast 1/3 territory of the island of Cyprus

Territory of the former Autonomous Region of South Ossetia 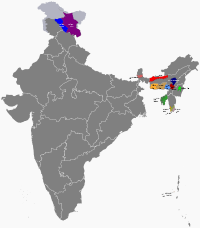 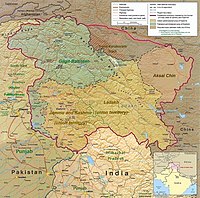 Political map of the districts of the Kashmir region with the Pir Panjal Mountains and the Kashmir Valley or the Valley of Kashmir.

The map of indonesian indigenous ethnic groups, foreign ethnic groups such as Chinese, Arabs, and Indians does not appear, but usually lives in urban areas.