Did the French regard Napoleon as a national hero

“His life was the stride of a demigod from battle to battle and from victory to victory. One could very well say of him that he was in a state of constant enlightenment, which is why his fate was so brilliant that the world before him did not see and perhaps will not see after him either. "In Johann's eyes Wolfgang Goethes (1749–1832) was Napoleon Bonaparte (1769–1821) a universal genius and hero. The former Emperor of the French had profoundly shaped the face of his age.

Goethe shared this enthusiasm with a number of German-speaking artists. The death of the Corsican on May 5th, 1821 inspired some to write elaborate mourning poems. The Austrian Franz Grillparzer (1791–1872), for example, portrayed the Corsican as a scourge of God and destroyer of the world on the one hand, and as a superman on the other: "He was too big because his time was too short." Letters like Goethe and Grillparzer meant nothing less than that End of an era. This historical dimension was a central feature of his heroism for them. The fact that the Corsican was actually of such importance was to be proven in the further course of the 19th century. 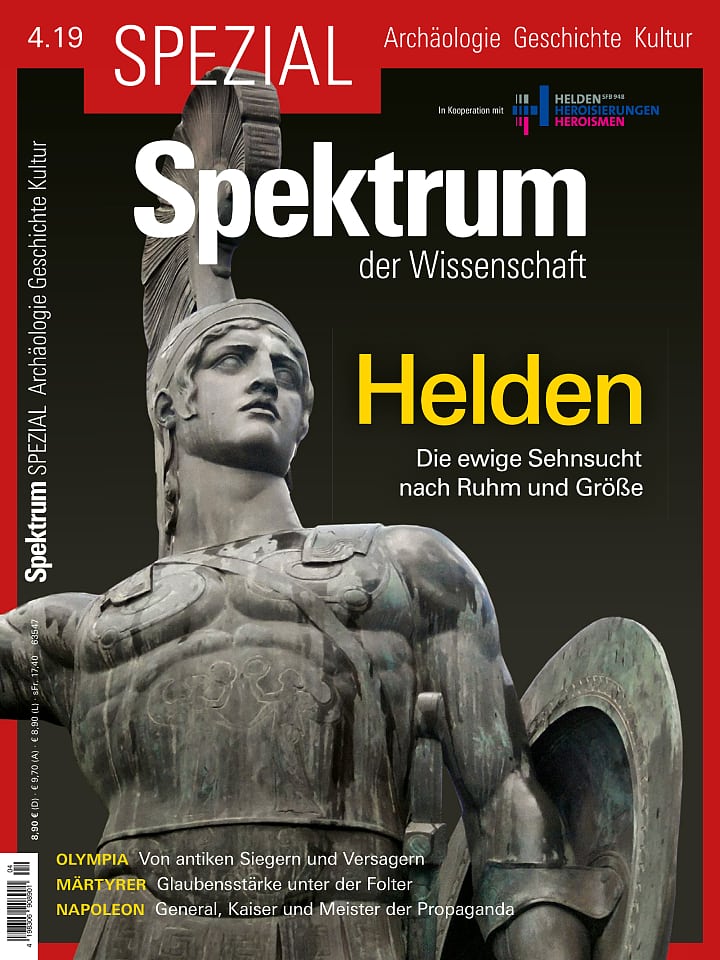 To be perceived as a person of historical proportions was already a central concern of Napoleon himself. The way in which he had himself portrayed by the French history painter Jacques-Louis David in 1801 is an eloquent example: as the dynamic general who led the revolutionary army a year earlier across the Alpine pass of St. Bernard against a coalition of European monarchies. At the lower edge of the picture the artist painted names carved into rock, documenting Napoleon's claim: "Karolus Magnus" and "Annibal" - Charlemagne and Hannibal - can be read next to "Bonaparte". Napoleon, who shortly before crossing the Alps had eliminated the Directory ruling France with a coup d'état and since then ruled the First French Republic as consul, appears in this painting not only as a man of action, but also as the end of a series of heroes who run the course had changed history.

Bonaparte endeavored like hardly any contemporary to construct such an image of himself, to propagate it and to pass it on to posterity. He made clever use of the media. For example, on the occasion of his Italian campaign in 1796/97, he founded two magazines specifically to announce the heroic deeds of the army he led in his homeland. The campaign apparently succeeded because this campaign formed the cornerstone of his military and political career. Later the "Bulletin de la Grande Armée" reported on his conquests, after his coronation as Emperor of the French in 1805 it appeared as a permanent section of the then most important French daily newspaper "Moniteur universel". Vivant Denon, Napoleon's confidante and closest collaborator in matters of art politics, was officially responsible for editing the pages, but the ruler actually corrected almost every edition himself.

In addition, he was active as a patron of the arts, but as the historian Annie Jourdan from the University of Amsterdam showed in 1998, this also primarily served the maintenance and control of a hero image. Again and again Napoleon commissioned artists with portraits, busts and occasionally with statues that were supposed to depict aspects of his heroism. Because in the course of his career he needed new attributions in order to present his actions appropriately.

So he initially stylized himself traditionally as a general who led his troops from victory to victory under adverse circumstances. After the coup d'état of 1799, Bonaparte emerged as the savior of the revolution, which had put a stop to a corrupt directory and increasing anarchy. With the enactment of the "Code Civil des Français", a code of civil law, he gave the legislature and hero of liberal ideas in 1804. The emperor, who had conquered large parts of Europe and subjugated its hereditary monarchies, was now portrayed as a political lightbringer who spread the ideas and principles of the revolution on the continent. Overall, Napoleon designed himself as a figure of extraordinary historical greatness, in which classic military heroism was just one facet of many.