Who is this Maoist 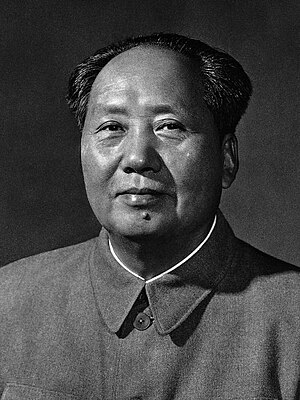 Mao Zedong when he was seventy years old. He was called "outstanding leader". His type of communism is called Maoism.

Mao Zedong, read: Mau Dsöh-Tung, was a politician from China. His name is also spelled Mao Tse-Tung. He was the head of the communist party and made sure that the party ruled over all of China. So he also became head of the country. Many millions of people who were enemies of this idea were murdered in his day.

Mao was born in 1893. His parents owned a farm and were not poor. Mao was a rebellious boy who did not want to obey his father's rules. As a young man he came to Beijing, the capital, and got to know the ideas of Karl Marx there.

Mao became a member of the new Chinese Communist Party. At that time there was a civil war in China. Mao and his followers moved to an area in the country far from the big cities. There he developed his power. He survived World War II and defeated the Chinese government after the war. She fled to Taiwan.

Mao died in 1976. Since then, not only one man has headed the party. Instead, several communists take care that a single one does not become too powerful. Even so, you can still see many pictures and statues of Mao in China today. The party believes Mao did more right than wrong. As with Lenin in the Soviet Union, his dead body was also preserved. It is located in a building, the Mao Mausoleum, on the great Tiananmen Square in Beijing.

What did Mao do as head of China?

In 1949, Mao made China a new state: the People's Republic of China. There were other important politicians in the party. In order to secure his own power, Mao was particularly cruel. He persecuted people who disagreed. Children had to betray their parents. Students captured their teachers. This bad time was called the "Cultural Revolution". Schools were closed. The students traveled across the country. In order to restore order, the young people were sent to the farmers in the country. Some of them stayed there for years.

Mao also wanted China to have a lot more industry quickly. Most of the Chinese were farmers. In doing so, the party was not only ruthless, but also made many mistakes. The farmers were persuaded to build small blast furnaces for steel melting on their fields. But the steel was unusable. Because agriculture was no longer properly cared for, there was little to harvest. 45 million people died in this famine.

People outside of China should also like Mao. He had his books translated into many languages. One of them was the little Red Book, the so-called Mao Bible. In many countries there were communist parties that worshiped Mao and were against the Soviet Union. However, these parties usually remained small and unimportant.

There are also other search results for “Mao Zedong” from Blind Cow and Ask Finn.