How does Qatar Airways compare to Emirates

One or the other may be a little surprised by this comparison, because why should one compare the Qatar Airways QSuite as Business Class with the Emirates First Class, after all, there are two different classes. However, Qatar Airways also calls the QSuite “First in Business”, ie a business class that is almost on a first-class level.

Qatar is so convinced of its QSuite Business Class that one is of the opinion that it no longer needs First Class. The slogan “First in Business” is also deliberately sent in the direction of Dubai, because the competitor from the UAE offers With 14 first class suites in the Airbus A380, it is probably the most densely packed first class that we know from international airlines.

If you want to get a comprehensive picture of the two products, you can have a look at them in detail in our reviews.

To be completely honest, both airlines didn't really impress me on the ground, except with the sheer size of the lounges. In terms of ground service, there was no noticeable difference between Qatar Airways as a QSuite passenger and Emirates as a first class passenger.

Both airlines have their own check-in counters here, at which you can check in without waiting. However, there is no other service here and even as a First Class passenger at Emirates you will not be escorted into the lounge, only your boarding pass at the check-in counter. 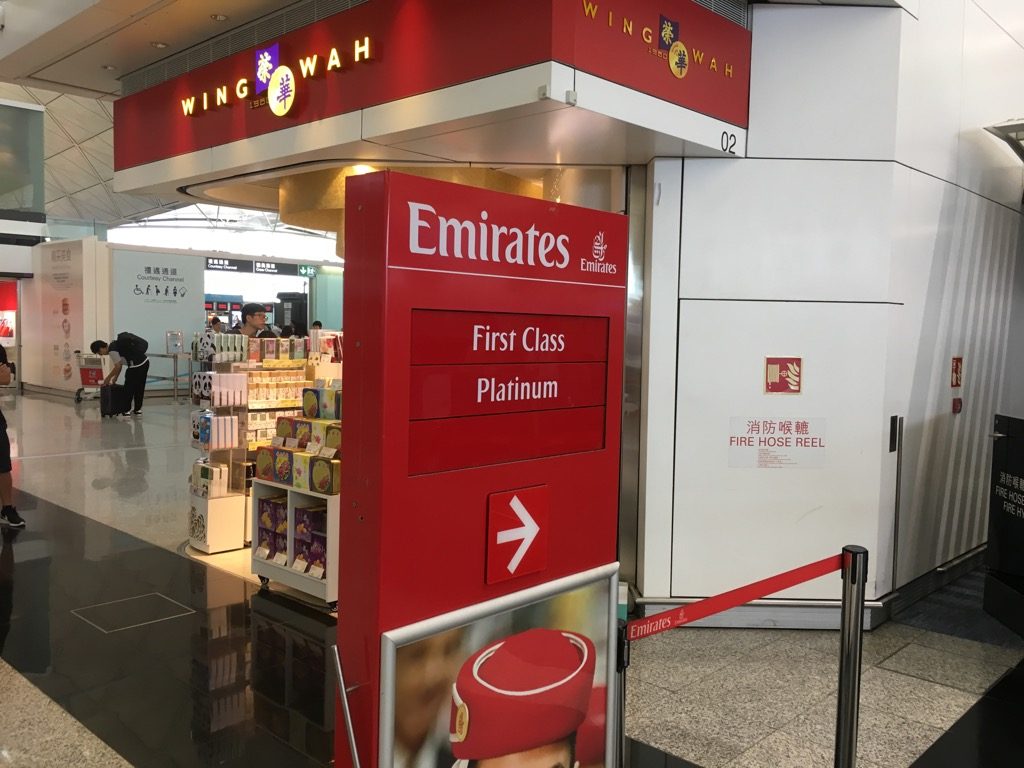 At the hub, Qatar Airways has a small advantage over Emirates. Here you have the check-in process with subsequent, private passport and security control, from which you can get to the lounge in a very direct way.

Emirates also has its own first class check-in area in Dubai, but this is nowhere near as efficient as the one at Qatar Airways in Doha. On the trip linked above, we are in Dubai only through transit and although there is a fast lane at the security check for first class, business class, gold and platinum customers, this fast lane is not due to the sheer number of passengers especially almost.

The Qatar Airways Premium Lounge in London Heathrow is one of the most beautiful business class lounges that I know worldwide and Nicole even liked it so much at the time that she regularly asked me if we could not fly via London with Qatar Airways again.

Incidentally, only First and Business Class passengers have access to the Qatar Airways Premium Lounges. No status brings you into this lounge, which also explains why Qatar Airways does things like an á la carte restaurant here.

The Emirates lounges at outstations are always combined first and business class lounges, which can also be visited with the Emirates Skywards program from gold status.

I always find the Emirates Lounges at outstations very good and a visit is always worthwhile. For example, they offer a very extensive buffet, high-quality drinks and the lounges are rarely full. However, what is offered is clearly inferior to that of the Qatar Airways Premium Lounges. However, if Qatar Airways has to fall back on a third-party lounge, these are by far not always better than the Emirates lounges at outstations.

Both airlines naturally operate their own lounges at their respective hubs in Doha and Dubai. All lounges have one thing in common and that is that they are extremely large. However, I was not really impressed by the Al Mourjan Business Class Lounge in Doha, which is only available to Business Class passengers, nor the Emirates First Class Lounges in Dubai, which can be visited with a First Class Ticket or an Emirates Skywards Platinum status.

The Al Mourjan Business Lounge in Doha has a lot to offer and is nicely designed, but I only know the lounge uncomfortably full and, for example, the range of food didn't really blow me away. The lounge isn't bad either. You can find a review here. In contrast to me, Tim was very enthusiastic.

Winner lounges at the hub: Emirates

Personally, I would prefer the Qatar Airways QSuite, not least because I like the design of the QSuite much better than the many gold at Emirates. Only the little extras, such as your own minibar at the seat, the make-up mirror and the writing set at Emirates come to mind as advantages, but you don't necessarily need such gimmicks.

The Qatar Airways QSuite is more or less limited to the suite itself. There are no extras such as a large bathroom or a bar on board (these are only available in the Airbus A380 at Qatar and this does not yet have the QSuite). Qatar Airways' entertainment system is good, but not great either. In addition, each passenger receives free and very fast internet for 30 minutes.

In this category, the Emirates First Class can score points across the board. For example, the airline offers very impressive spas, including showers for first class passengers, and there is something impressive about showering in 40,000 feet on the way home or on vacation.

The first and business class bar in the Emirates Airbus A380 is also a real highlight and some passengers spend almost the entire flight here.

The Emirates IFE is regularly recognized for a reason and it is arguably the best in the world. I don't know of any other IFE that offers such a large selection and has entire seasons of series on offer or not just the latest, but all Harry Potter films, all James Bond films and all Marvel films, etc.

Of course, there is also WiFi at Emirates, but this is not particularly fast and stable. In return, First Class passengers get unlimited, free internet if they are registered with Skywards and have saved their frequent flyer number.

Both Qatar Airways in QSuite and Emirates in First Class distribute pajamas and amenity kits to passengers. Qatar Airways has the beautiful Brics Kits and pajamas from the White Company. Both are of high quality and can be seen for a business class.

Emirates distributes so many goodies in First Class that an Emirates bag is given away with them so that passengers can take everything off board if they want.

At first glance, Emirates in First Class and Qatar Airways in Business Class offer a very similar service, because both airlines offer a dine on demand concept, with which the guest can order something from a large menu at any time he wants.

In reality, Emirates is of course superior to Qatar Airways QSuites in First Class, but this is in the nature of things. In First Class, there is simply more money being spent and there is a proportionately more crew, which you can see in the service.

The food in the Qatar Airways QSuite is very good, there is no doubt about it and I hardly know any airline that serves food at this level in Business Class and you could certainly serve a lot in the same way in First Class.

In the Emirates First Class there is once again much higher quality food and drinks, which must be withheld from the First Class, such as caviar and very expensive champagne.

Nobody really needs such luxury, but the food on offer in Emirates First Class was even better than with Qatar Airways in QSuite. The comparison is certainly very unfair, because the ticket prices in First Class are on average not insignificantly higher.

I always find the latter very difficult, because you can always produce cases in which you have to pay exactly as much for the Qatar Airways QSuite as for the Emirates First Class. In this case, I would immediately prefer Emirates First Class in order to come to the question asked at the beginning.