The death of Jesus is at the center of the most important holiday of Jehovah's Witnesses. At the Lord's Supper, however, only those who believe that they are among the 144,000 chosen take bread and wine.

In around 112,000 congregations around the world, Jehovah's Witnesses celebrate their highest holiday today with the Lord's Supper, a day to commemorate the death of Jesus. The date for the day is calculated according to the Jewish lunar calendar as it is said to have been in use at the time of Jesus. In 2013, according to your calculations, this is March 26th.

In the faith of Jehovah's Witnesses, Jesus is the only one created by God and subordinate to his Father. Through the sacrificial death of Jesus on a stake, not on a cross, people are redeemed. But they must believe in the worth of this sacrifice and live their lives according to God's standards. During the sacrament celebration, Jehovah's Witnesses recall these beliefs in songs, prayers, and a ceremonial speech. 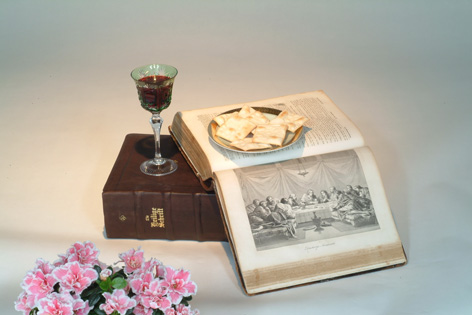 Red wine, unleavened bread and the Bible - these symbols are used by Jehovah's Witnesses to celebrate their most important holiday

After sunset, Jehovah's Witnesses meet in their houses of prayer and meeting known as the Kingdom Halls. For this purpose, the rooms are solemnly decorated. There is an elevation on which there is a table covered in white. On it are the symbols of the Lord's Supper: red wine in goblets and unleavened bread in bowls. The believers in the hall follow the Bible-oriented program in their own Bibles. Each scripture quoted is looked up and read along with it.

The Lord's Supper symbols, bread and wine, stand for “Jesus' sacrificed body and his innocently shed blood”, Wolfram Slupina from the religious community's information office told religion.ORF.at. After a prayer in which Jehovah's Witnesses thank God for sending his Son to earth, the symbols are passed from one to the other in silent remembrance of the death of Jesus. But only a few of those present take bread and wine. Most simply pass the symbols on in the ceremony.

Seat of government in heaven

Jehovah's Witnesses believe that the “Kingdom of God” quoted in the “Our Father's Prayer” is a real world government - with the seat of government in heaven, where the resurrected Jesus Christ is installed as King. As Jehovah's Witnesses read from the biblical text of Revelation, he has co-rulers at his side in his government: a total of 144,000 people.

“God chose her to go to heaven after her death,” Slupina told religion.ORF.at. “Together with Jesus, a new social order is to be introduced from heaven all over the world. A social order in which people will live in peace with one another and in harmony with their Creator and with nature. The heavenly government will restore the paradise that the first humans, Adam and Eve, lost back then for all who serve God. " 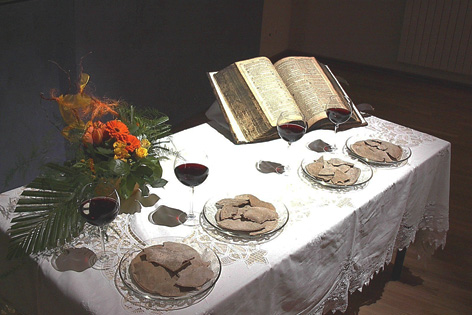 Wine and bread are consumed only by those who believe they are among the 144,000 members of the heavenly government

Jehovah's Witnesses believe, however, that only those are invited to take bread and wine who have been called by God to live “in heaven”. Most of those present, however, count themselves among the many people who expect to live happily ever after in paradise "on earth", Wolfram Slupina tries to sum up the beliefs of Jehovah's Witnesses.

Not only the believers are invited to the Lord's Supper on the highest holiday of Jehovah's Witnesses. Anyone interested can come, and this is also advertised through the mission service of the faith community.

Almost two weeks after the commemoration of the death of Jesus, on April 7th, the question will be asked at a follow-up event: “Is it all over with death?”. It is about the role of Jesus Christ in relation to the hope of eternal life. The same lecture will be given in all churches of Jehovah's Witnesses around the world.

The resurrection of Jesus was not incarnate as interpreted by Jehovah's Witnesses. They believe that his human body was “dematerialized” and that he was resurrected with a “non-material, spiritual body.” In this “pre- and post-human form”, Jesus is identical with the Archangel Michael, according to the community of faith in the book she published “ What does the bible truly teach?".