Between politics and the pipeline

India sees itself as a coming great power. That is why they are also self-confident towards the USA. "We strive to secure our energy supply, regardless of the route. We choose our partners ourselves," said Indian Oil Minister Mani Shankar Ayiar. He rejected the American criticism that US Secretary of State Condoleezza Rice recently voiced during her visit to India. Since the political thaw between India and Pakistan began, this project, which is supposed to bring gas from Iran via Pakistan to India, has been seriously considered by all concerned.

India's economy has an annual growth rate of almost eight percent and thus a rapidly increasing demand for energy. Since its own oil and gas resources are insufficient, the country will be increasingly dependent on imports in the future. Like China, India has begun to gain access to oil and gas reserves around the world. Delhi has been negotiating natural gas supplies with Tehran for over ten years. "India has massive interest in relations with Iran," says Christian Wagner, South Asia expert at the Science and Politics Foundation in Berlin. "Not only because of the pipeline, but above all because the trade route to Central Asia via Iran is to be secured. India-Iranian relations are therefore of great economic importance." 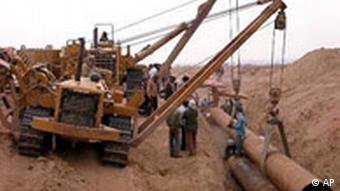 After Russia, Iran has the second largest natural gas reserves in the world. In addition, there are around eleven percent of the world's oil reserves. The country wants to bring these resources to the international market, and it is also interested in opening up its transport routes. It has therefore agreed to take over 60 percent of the financing for the 2,600-kilometer gas pipeline to India. But the US has now pulled the brakes on India - after all, according to US doctrine, Iran is to be isolated. "Then it is of course bad if some of your important allies, such as India or Pakistan, are doing a big energy deal with Iran at the same time," says Wagner.

The US accuses Tehran of secretly working on nuclear weapons and considers Iran a threat to peace. At the beginning of March 2005, US President George W. Bush extended the Iran sanctions imposed by ex-President Bill Clinton ten years ago. This means that US companies and citizens are still prohibited from entering into oil deals with Iran.

The USA wants to exclude Iran from the economic developments in the region, explains Jochen Hippler, professor for international politics at the University of Dortmund and political researcher at the Institute for Development and Peace (INEF). "The American policy, in relation to the pipeline systems in the region, aims first of all to isolate Iran, bypass it and to prefer pretty much every other conceivable form of pipeline route, just not through this country."

In recent years, the USA, India and China have become aware that the region around the Caspian Sea has so rich oil and especially gas reserves that it could develop into the second most important energy source in the world after the Arabian Gulf. Since the raw material deposits are decreasing in the previous production region at the same time, this factor is of great importance. "The US's energy dependency has increased massively in the last thirty years. In the past, people were almost self-sufficient in terms of energy - that's not even remotely the case now."

America's rejection of the Iranian-Pakistani-Indian gas pipeline is less about excluding the Indians and Pakistanis from the power play in Central Asia, the experts say. It is also in the interests of the US that India can maintain its high economic growth rates. Because: The Americans are the largest foreign investor in the Indian Union, the Indian community in the USA is now economically and politically relatively influential, American companies are extensively outsourcing jobs to India and the entire computer industry in the USA is heavily dependent on the cooperation the Indian software specialists. Against this background, Asian researcher Wagner recommends a pragmatic approach: isolating Iran on the one hand, but also taking into account the interests of friendly states on the other. "One could imagine that the pipeline might be postponed by one, two, or three years and a solution to the question of Iran's nuclear program will be found in this period," says Wagner. "If the Americans and Iran have sensible relations again, then of course this pipeline thing can be pushed forward again."