Tesla: Internet access in the car for a fee from May 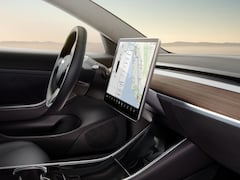 Tesla services are chargeable
Photo: Tesla Tesla will in future charge additional fees for customers who want to use full Internet access in their cars. According to a report by Teslamag, the automobile manufacturer informed its customers about this. Model 3, Model S and Model X are equally affected. The price for the German market has also already been set. Starting in May, customers who want to use premium Internet access will be charged a monthly fee of EUR 9.99.

At the end of last year, Tesla had announced prices around $ 100 a year. The monthly price now officially communicated to customers is thus a little higher than initially announced. Anyone who, as a Tesla owner who bought their vehicle after June 1, 2018, decides against the mobile phone subscription, can only use the data services for standard navigation from mid-May.

Tesla services are chargeable
Photo: Tesla This standard navigation is implemented at Tesla using Google Maps. However, the free data service does not offer a satellite view or the transmission of traffic data in real time, so that the system can only be used to a limited extent. If you want to use full-fledged navigation or, for example, music streaming via Spotify, you need a paid subscription.

Software updates are still only possible via WLAN - for example in your own garage. Anyone who can access WLAN access may also be able to avoid the data subscription. In this way, all online services are still available free of charge. Mobile, for example, could also use one's own smartphone as a hotspot for the Tesla car hi-fi system, so that an already existing data tariff can be used. Disadvantage: The antenna of the smartphone is shielded inside the car.

Tesla had offered free Internet access in the car since 2012. Two years later, free access was limited to a period of four years. In autumn 2019, there were finally indications that plans for paid internet access would be implemented. The introduction of the premium online tariff was originally planned for January. It is not known why there were further delays.

In the first year after purchasing the vehicle (or for Model 3 with Standard Range and Standard Range Plus for just 30 days) Internet access remains free. After that, buyers of the not exactly inexpensive vehicles have to make do with their own data tariff and tethering - or do without a large part of the data services. This "hurts" all the more because services such as Android Auto and Apple CarPlay are not available at Tesla.