How annoying are Bangalore drivers

Cycling in Berlin
Between attitude to life and danger to life

For many Berliners, cycling - that is the attitude towards life, ideal locomotion and the conviction that the future belongs to the bicycle even 200 years after its invention.

“I think the idea of ​​a city with more space and better air is great,” says a cyclist, for example, who likes to get on the saddle even when it's raining. However, this is still just an idea: every day, not only on Berlin's main thoroughfares, car after car, from traffic light to traffic light. Lone fighters, plagued by congestion, sit inside and watch as the cyclists pull past them. But things are also beginning to move in the frozen minds of many motorists. Although car traffic is declining in the city center, at the beginning of 2018 only 13 percent of journeys will be made by bike. For comparison: In Münster, Germany's number one bicycle city, the figure is around 40 percent.

Fifty percent of car journeys in Berlin are shorter than five kilometers - a cycle route that is easy to manage. 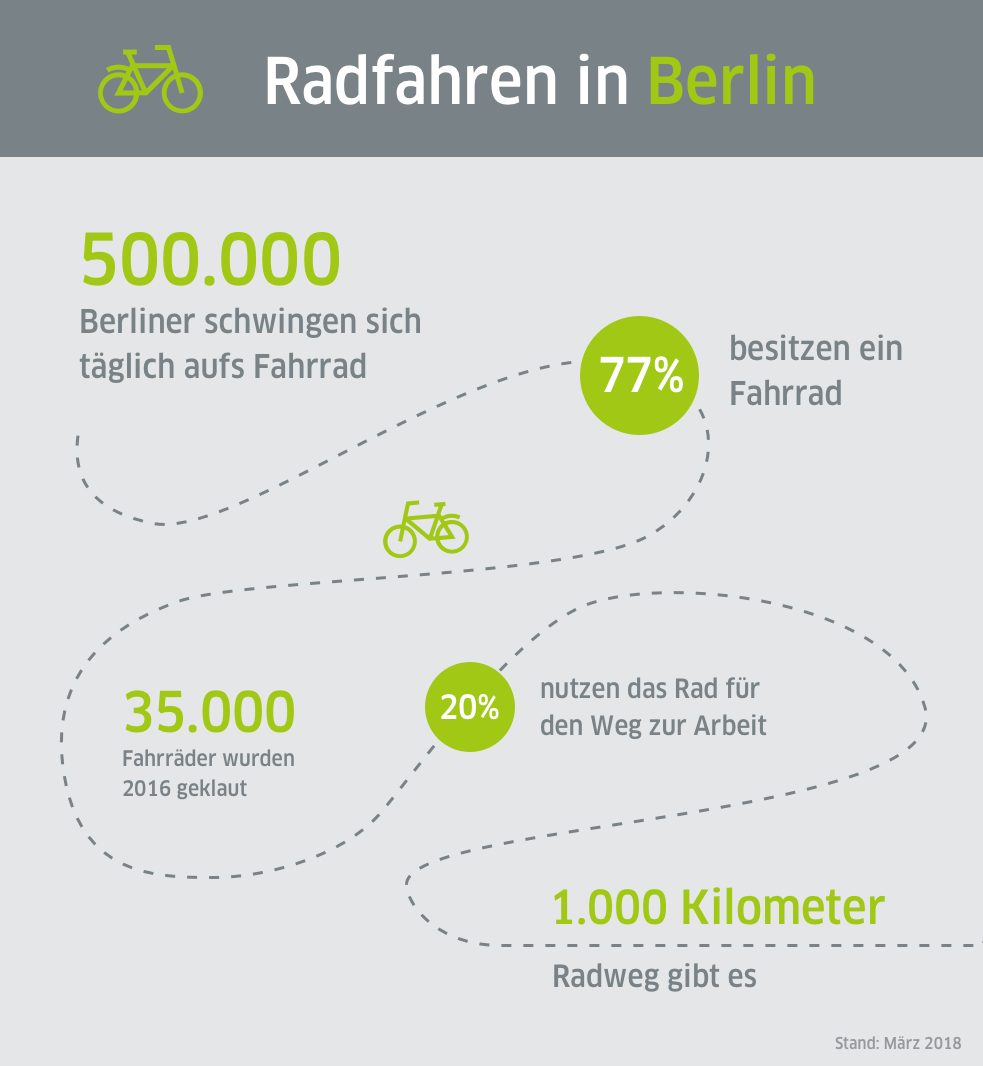 If you get on your bike in Berlin, you don't just need foresight with a view of the next busy intersection. The metropolis is still miles away from being a bicycle capital. It's rarely fun on Berlin's streets: too narrow, too busy. Cyclists, drivers, buses, trams, pedestrians - in many places there is an uphill battle to find one's own lane.

Bike paths? Too few, too narrow, too invisible. They are also often used as a parking area. So it's not surprising that the notorious Berlin tone is often a little rougher. There is gesticulation, yelling, shoving - by drivers and cyclists alike. The cyclists are no less loud, but they are clearly the weaker road users. In 2017, 9 cyclists died in Berlin traffic, in 2016 there were even 17 people. In addition, there are hundreds of seriously injured people every year. 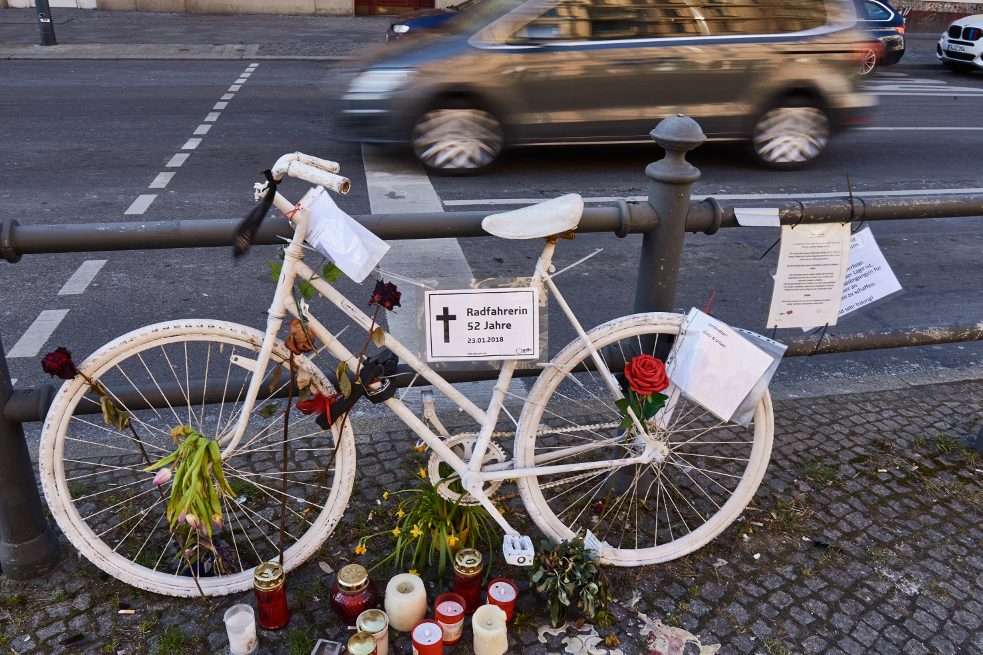 Sad memorial: The “ghost bike” painted white reminds of cyclists who have had an accident in traffic. | Photo: Jörn Blind © Goethe-Institut
Nevertheless, the idealism of Berlin's cyclists cannot be slowed down by statistics or nitrogen oxides. “I ride a bike because it's the best way to drive a convertible all year round,” you hear for example. Or: "Because you are never stuck in traffic jams and you are closer to the weather, because you are environmentally friendly, can be flexible and independent of bus and train times - and reach your destination on time and more relaxed."

Cycling - on the one hand, this is the opportunity to get from A to B. On the other hand, it is the route itself. And that can be much more adventurous by bike than behind the wheel. For example, a drive through the city on a warm summer night, when the traffic is almost at a standstill, when you become one with the pedals and get into a flow that makes you forget everything that lies in front of and behind you - except the traffic.

Anyone who has now become enthusiastic and is thinking of changing trains should be told that you no longer need your own bike to cycle. Rental bikes have become an indispensable part of the city. It feels more and more every week. They are everywhere, with neon-orange spokes, in turquoise or silver, lots of bright spots of color, sometimes in droves, sometimes lonely. There were more than 16,000 bikes from a total of six different suppliers at the beginning of 2018 - and the trend is rising. There is already growing resentment that the rental bikes would clog the sidewalks even more. The urban provider Nextbike - one of the first in the city - is recording increasing numbers of users despite growing competition. 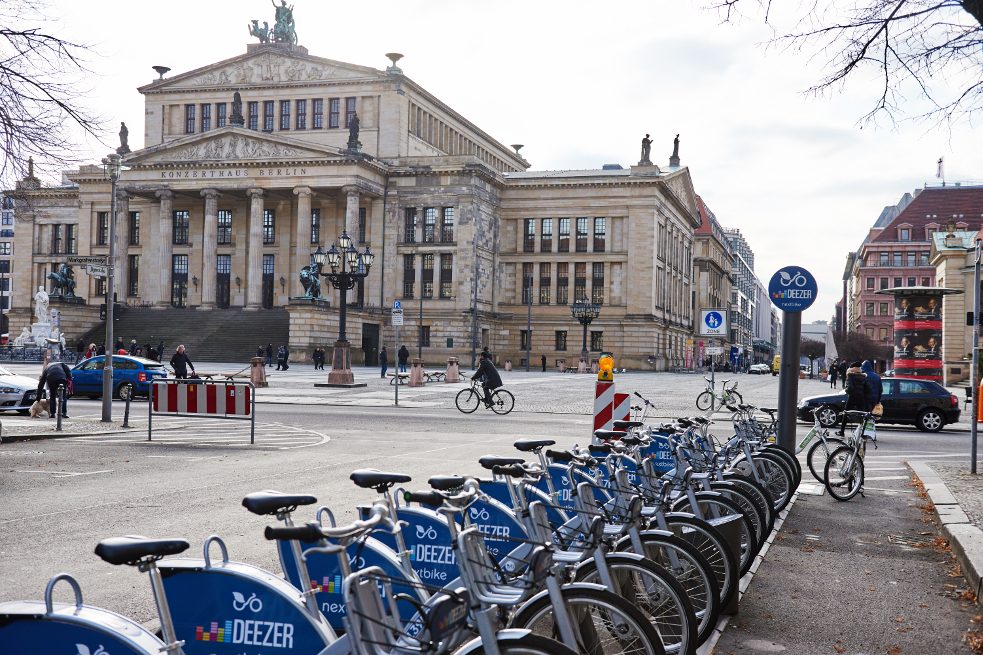 The rental bikes of the city provider nextbike are in front of the Konzerthaus Berlin. Nextbike wants to make a total of 5,000 bikes available at 700 stations in Berlin by the end of 2018. | Photo: Jörn Blind © Goethe-Institut 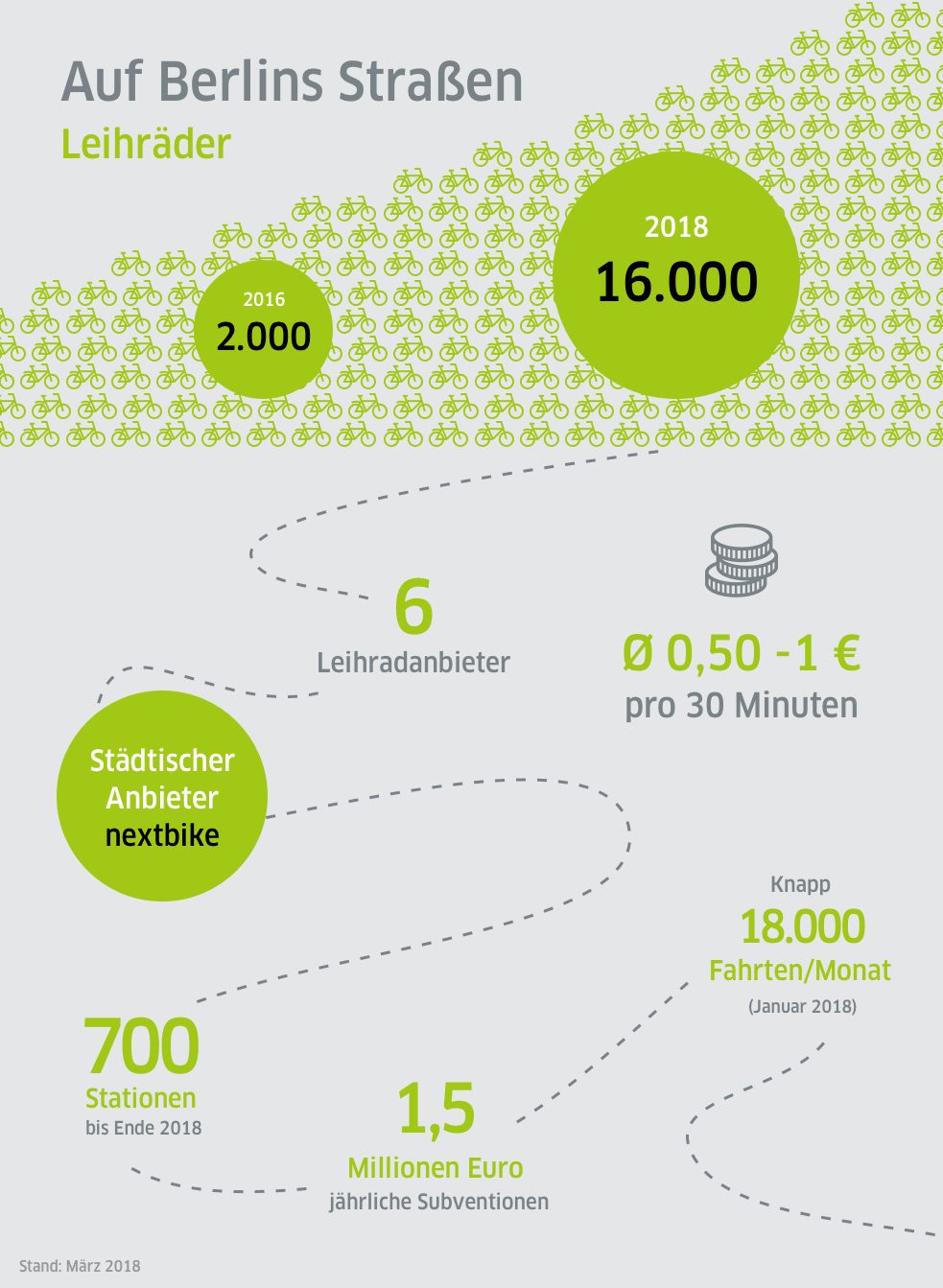 Instead of car noise, the freewheels hum softly

With so much two-wheel power, it has meanwhile also arrived in politics that more needs to be done for the bike. At the beginning of 2018, Germany's first bicycle law was passed as part of the “Berlin Mobility Act”. There is at least a glimmer of hope: Berlin is to get wider and more bicycle lanes with green waves, cross-free bicycle expressways as well as bicycle streets and bicycle parking garages - and these are just a few of the planned measures. “With the Mobility Act, the beginning is finally being made for a new era of transport policy in which the city no longer belongs only to drivers, but to everyone,” says the delighted ADFC, which represents the interests of cyclists in Germany. The bicycle city is already developing on a small scale; more and more initiatives are calling for car-free zones and bicycle streets. Larger projects are also taking on more concrete forms, for example the “Radbahn” project - a bicycle route under the underground viaduct, nine kilometers through Berlin.

In Berlin, almost every lantern, every post, every delicate plant is used to chain wheels. If the initiative “Volksentscheid Fahrrad” has its way, Berlin would need 200,000 new parking spaces. In addition to lockable boxes, multi-storey bicycle parking garages are planned, in which the bikes can be stacked towards the sky. With 3,500 parking spaces, Germany's largest bicycle parking garage is currently located in Münster - with all the comfort you need to keep your bike fit: a workshop service, additional bike rental and even a bike wash.The Berliners themselves have a clear vision of what their bicycle city should look like one day: “The Berlin of the future will have highways for bicycles that are free of traffic lights for long stretches. Parking spaces are being turned into green bicycle parking spaces. Pedestrians and cyclists have priority in the traffic lights. Instead of car noise, the freewheels hum softly, ”predicts a particularly enthusiastic cyclist.
Yes, who wouldn't get on a bike?

Münster, the city of bicycles

Perhaps it is worth taking a look at Münster to get an idea of ​​what the Berlin of the future might look like one day. Because the North Rhine-Westphalian city has understood one thing: if more people are to pedal, something has to be done about it. One example is the car-free ring around the city center. In the meantime, one in three people from Münster gets on their bikes every day. There are almost twice as many bikes as residents, namely 500,000.
<?