Have you ever seen real witchcraft

Grab it and wrap it up and the kid will be gone.

What you need to know about witches

All About Witches You Need To Know!

Always be careful because witches are the worst creatures and can be anywhere because they look like normal women. I would like to point out to you that they hate children and therefore children are also the most common victims. So that you don't become such a victim, here are the most helpful tips on how to recognize and avoid them.

motto: „Grab it and wrap it up and the child will be gone.“

features
1. A witch wears gloves always and everywhere. Even in summer, because she has claws instead of fingernails.
2. A witch is as bald as a boiled egg. She doesn't grow a single hair, so she wears a wig. Always! But it is a first-class wig, because you can hardly tell the difference to normal hair.
3. A witch has slightly larger nostrils than normal women. The edge of the nostrils is light pink and a bit wavy. With their nose they have an unimaginably great olfactory strength.
4. The eyes are a little different on a witch, because if you look deeply into her eyes, into the pupil, then it looks as if ice floes are dancing or fire is flickering.
5. Witches have only feet and no toes.
6. Then there is one last tip. Real witches have blue spit. And if you look closely, there will also be blue plaque on your teeth.
So: Be careful! 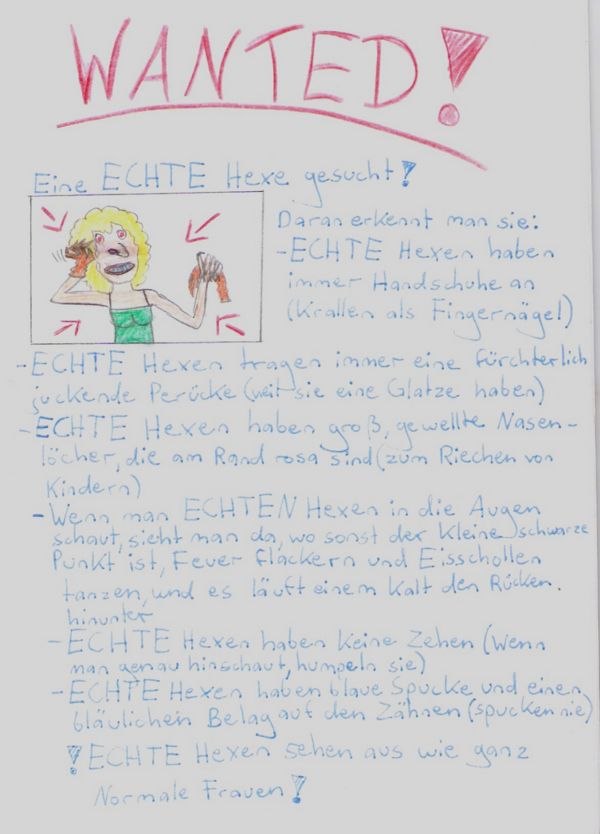 From the witch's lexicon for budding hexologists

What spell do you think of?

Mix 5 toad eggs into a mixture of chicken poop and fly wing. Seven snake tails add and stir everything well until it becomes a paste. Heat three hours and seven Chill for hours, then it will be a powder.

Finally you say the magic spell: "Ene my Kläke - and now you will become a snail."

If you would like to practice a little more, the word and rhyme witch will certainly help you. Have fun! 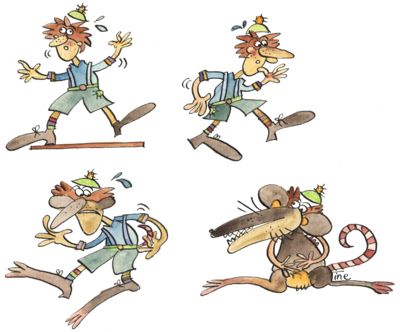 The recipe: "Formula 86 retard / mouse mutarium"
Can you use the word module to put all the gaps in this recipe together?

So you take the wrong one End of a telescope and then you cook it until it's nice and soft. They are exactly 24 Hours. While it is simmering, you take it very precisely 45 brown mice, hack them the tails off and fries the tails in hair oiluntil they are cooked through and crispy. The mice whose tails have been chopped off are steaming one hour in frog or toad juice. Now there is one more thing to add that will cause a real delay. The secret is one Alarm clock. However, you don't need one for each child! A only alarm clock is for thousand pass.
One sets the alarm clock that it is the closest Tomorrow morning at 9 o'clock the bell rings. Then roast you it in the oven until it is tender and crispy. Next step: you take your simmering telescope and yours fried mouse tails and yours steamed mice and throw everything in the blender. At Top speed mix until thick paste arises. And while the mixer is running, you have to add the yolk from a grunt egg. This is mixed in and then the following ingredients are added one after the other: the claw of a crabcracker, the beak of a gossip-mouth stealer, the snout of a crawler spatter and the tongue of a cat's knee.
When everything is well mixed in the mixer, one becomes lovely bright green liquid . A single drop of it will rise the chocolate or on one Chocolate candy dripped. The child who ate this will be transformed into a mouse in 24 hours!

Visiting the zoo of extraordinary animals

This is how it could go on after the chapter "The Ancients":

It has to be crushed on the spot! ... All the witches peeked under the tables and chairs. The high and grand master witch roared and the noses sniffed. A mess, as I found out! But I was afraid and afraid. I hoped they would not find me and give up their search. But pointless! The witches searched, groaned, groaned and croaked. They searched for almost half an hour and I was trembling behind my screen. To distract myself, I asked myself what my mice would do now? Then the high and grand master witch roared again: “This must be the gind!” Suddenly the witch, to whom I owed everyone's attention, came up to me. I pushed myself into the corner, but it didn't help, she had already discovered me: "I have the child!" Her voice boomed. Now everyone else came running and dragged me out from behind the screen. I wondered if I would ever see the light of day again. “You are to become the second victim of our new recipe!” Shouted the high and grand master witch. “You must have been listening to us the whole time! Then you know how it works. ”Now everything happened very quickly. One of the witches got a piece of chocolate and the high and grand master witch dropped a drop of the mouse mutarium on it. I had to eat it and then there was a knock on the door. “The tea is getting cold, ladies! May I ask you to open the door? ”The director's voice called. The witches quickly pushed me back behind the screen and then went to the door. When they were finally all gone, I let out a breath. Now I look down at myself. I was still my normal size and looked normal too. Funny! Then it occurred to me: The alarm clock was set for three thirty that day! We were now half past five! Maybe the magic no longer works? I quickly ran to the door and then into the garden. I couldn't believe my luck! I got away safely!