Where does gold get its value from?

Millennia of value: why is gold such a good investment?

From the coffin of the pharaohs, the Roman aureus coin to the conquest of the conquistadors in Central and South America to the gold rush on the Klondike River.

Gold plays a consistently high role in the entire history of mankind through all cultures and historical epochs.

Not only as a means of payment, but also as a symbol of power and status, there is hardly any other precious metal that has and still does so. But why gold of all things?

Gold: eye-catching and easy to work with

If you take a look back thousands of years before our era, it quickly becomes clear where the roots of the value of gold lay, because it is primarily based on its properties: As one of the few metals, gold also occurs in a dignified form - for example in the form of nuggets - and does not have to be laboriously removed from the rock.

In addition, a gold nugget stands out from its surroundings because of its color. It is therefore likely that members of earlier cultures discovered something shiny while fetching water in the sandy creek bed - a piece of gold.

What these early humans might also have noticed: In contrast to almost all other substances that determined life at that time, gold appears immortal: it neither corrodes nor can it be burned by heat, like a piece of wood. It can also be worked on with simple stone tools.

In connection with its rarity, gold was used for cultic jewelry and other ritual objects. With the advent of bartering, gold soon took on a role as a means of payment for particularly expensive goods.

However, early humans recognized that those who had more gold were better off - and began to look for ways to get to larger quantities of the precious metal than would be possible by mere searching.

Tear from the stone by heat

In the Copper Age, which, depending on the region, was between 7500 BC. Chr and 5500 BC Began, people discovered the possibilities of smelting - a metal enclosed in a rock is liquefied by heat and removed from the stone. At the same time, these early cultures also found out that gold, which is so coveted, is comparatively easy to extract thanks to its low melting point.

This marked the beginning of the first widespread use of gold as a payment and status symbol. The latter also as grave goods - the oldest known gold artifacts were found in a burial ground in Bulgaria and are dated by historians to around four and a half millennia before the beginning of the era.

And even in these pre-Christian epochs, the distribution of work and wealth functioned in a similar way to today: Those who knew how to get the gold out of the stone achieved prosperity - together with those who could contribute the labor.

Empires that could produce gold flourished. For example the Egyptians, who operated real gold mines in their area, called it the “flesh of the gods” and thus established one of the most important cornerstones of their power. Without the wealth that came from gold, the Egyptian Empire would probably not have attained a similar importance.

In Europe and Asia, the Copper Age and the associated smelting of gold spread overland from eastern Anatolia. Interestingly enough, gold had a similar meaning in almost all cultures.

The advanced civilizations of Central and South America also made similar uses of gold. In Peru, for example, objects were already gilded at the turn of the times. The precious metal served there as it were as in our latitudes as a means of payment and raw material for ritual objects.

However, these cultures did not know the "greed" for gold to the extent that it grew in Europe and Asia: As the empires grew, so did the need to procure more and more gold for financing. In Central and South America there were abundant gold deposits which, due to differences in technical development, were by no means exploited to the same extent as was the case in the "Old World".

In the centuries after Columbus ‘voyage of discovery, this was the undoing of the advanced civilizations: Spain in particular ruthlessly exploited the gold deposits of the New World - increasing its wealth but permanently destroying the indigenous cultures.

What is particularly interesting is the fact that gold was not only used as a means of payment and exchange itself, but also as a cover: Anyone who owned gold could exchange it for the current currency even in ancient times. This made the precious metal a kind of universal currency early on.

At the same time, gold was also the main raw material for many coin currencies in the long period between antiquity and the period after the Second World War - until 1971, for example, the US dollar was linked to the value of gold. Today it is hardly a currency anymore. However, even today gold still has the same value as an investment and a means of jewelry.

Private individuals can still rely on physical gold, for example in the form of bars. Gold bars have always been considered a safe investment because, for example, they are not dependent on monetary devaluation due to inflation. However, the trend is also moving in the direction of the gold processing industry: Instead of investing in gold, many investors prefer to invest in companies that mine or process the precious metal.

Of course, it would border on glass balls to want to fathom the importance of gold for more than a few decades in the future. However, conclusions can be drawn from the past: the fact is that gold has played a constant role almost since the first days of modern man, all in all for ten to twelve thousand years.

From this point of view alone, it seems highly unlikely that the precious metal will become meaningless within a generation or two.

Of course, branches of industry can break down due to technological developments, but gold that is physically present will always have a certain value. If all the gold that has been mined, found or smelted in the course of human history were really poured into a cube in its purest form, it would have an edge length of just under 21 meters.

And in view of the technical importance of gold, some of which only emerged in the past few years, there is a high probability that gold will continue to be important for people in the distant future - even if the technology then no longer exists for unknown reasons. 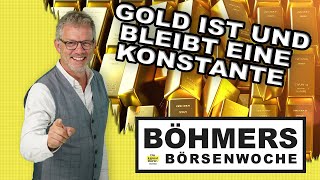 The gold market is weak - and yet gold is and will remain a hedge and constant in the portfolio An amazing event, because gold is in principle an ideal crisis investment and security for your portfolio. Since the end of 2020… ›read more