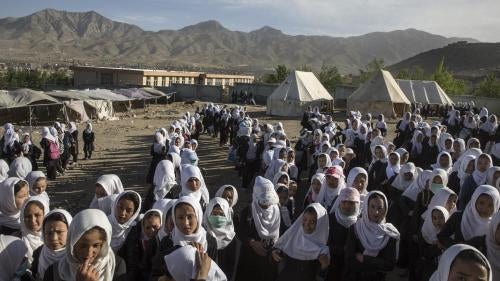 (Kabul) - The efforts of the Afghan government and international donors since 2001 to provide girls with access to education have declined significantly in recent years, Human Rights Watch said in a report released today. Sixteen years after the Taliban was overthrown by a US-led military intervention, an estimated two-thirds of all Afghan girls do not go to school.

“In 2001 the Afghan government and donors made grandiose promises to give all girls an education. But insecurity, poverty and displacement are forcing many girls today to stay away from school, ”said Liesl Gerntholtz, head of the women's rights department at Human Rights Watch. "The government must focus again on giving all girls access to school, otherwise all progress made so far could be lost."

The 132-page report "I Won't Be a Doctor, and One Day You'll Be Sick: Girls' Access to Education in Afghanistan" documents how many international donors are turning away from Afghanistan as the security situation worsens, and so are them Progress in girls' school access has stalled. The report is based on 249 interviews conducted in Kabul, Kandahar, Balkh and Nangarhar provinces. Most of the questions asked were girls between the ages of 11 and 18 who were unable to complete their schooling.

The topic of educational opportunities for girls is often presented as a success story by donors and the Afghan government. In fact, millions more girls go to school today than under the Taliban. But the stated goal of allowing all girls to go to school is still a long way from being achieved. Instead, the proportion of female students in some parts of the country is falling again today. According to the government, 3.5 million children do not go to school, 85 percent of them girls. Only 37 percent of young women can read and write, compared to 66 percent of their male peers.

The Afghan government operates fewer schools for girls than for boys, both primary and secondary schools. In half of the provinces, less than 20 percent of teachers are female - a major obstacle for the many girls whose families do not allow their daughters to be taught by a man, especially in adolescence.

Many children live too far from the nearest school, which affects girls particularly. Around 41 percent of the schools have no permanent buildings. Many schools lack boundary walls, water connections and toilets - this also affects girls disproportionately.

Speaking to Human Rights Watch, 15-year-old Kahater, who grew up in rural Samangan Province, said, “It was a long time to go to the next girls' school - it was in a different village ... On a donkey or horse you would go from morning to noon need."

Girls have to stay at home because discriminatory views prevail in their environment, which do not attach any value or no justification to their upbringing. A third of all girls marry before they turn 18. Once engaged or married, girls are often forced to drop out of school.

Many families are fighting desperately to ensure that their daughters can get an education despite enormous obstacles. You deserve support. Human Rights Watch interviewed families who had moved within a city or within the country to find school for their daughters. Others accepted a family separation in order to enable the girls to go to school. Some families sent their older sons on the dangerous journey to Iran to work illegally and thus pay the school fees for their younger sisters.

Under Afghan law, schooling is compulsory up to the ninth grade. Then the children are usually around 14 years old. In practice, however, many children do not have access to any schooling up to this level - or any schooling at all. Bureaucratic hurdles and corruption create further obstacles, especially for internally displaced and socially disadvantaged families. Even when schools are free of charge, there is a cost to the children attending school so that many families cannot afford to send one of their children to school. Financial constraints often ensure that sons are given preferential schooling. Around one in four children in Afghanistan works to enable their families to make a living despite abject poverty. Many girls weave, embroider, go begging or collect rubbish instead of going to school.

The Taliban and other insurgent groups now control or claim more than 40 percent of Afghan districts. The fighting between the Taliban and government forces has forced thousands of families to abandon their homes. More than a million Afghans are internally displaced. In many areas under the control of the Taliban, school attendance for girls is banned or limited to a few years. In contested areas, going to school means an increased safety risk. The conflict is accompanied by lawlessness: there are more and more militias and criminal gangs, and girls are threatened with sexual harassment, kidnapping, acid attacks and targeted attacks on their schooling. In this environment, access to education is becoming increasingly difficult, which affects girls disproportionately.

In cooperation with the Afghan government, international donors have developed innovative models designed to allow girls to continue to school despite the escalating conflict. “Community-oriented education” consists of a network of courses that are often taught in private homes, which enables girls in particular to receive an education in their social environment far away from state schools. However, since these special courses are exclusively financed by donors and implemented by non-governmental organizations, there is no uniform connection to the state school system and lessons do not take place regularly due to the unreliable funding cycles of the non-governmental organizations.

"The schooling of many girls could be saved by integrating community-based teaching into the state school system, financing it sustainably and controlling its quality," said Gerntholtz.

According to UNESCO's international standards, the government should spend at least 15 to 20 percent of its total budget and 4 to 6 percent of GDP on education. The United Nations is calling for the least developed countries, including Afghanistan, to fully exploit or even exceed these ranges.

The Afghan government, together with its international donors, should improve school access for girls by better protecting schools and pupils and by institutionalizing and expanding educational models that help girls learn. They should also take concrete action to meet Afghanistan's international commitments to provide universal, free, compulsory primary education and free secondary education nationwide. They should also promote and develop offers for “fundamental education” for people who have not received school education or who have not been able to complete elementary school.

"Despite the major problems Afghanistan is confronted with, the government can and should work towards ensuring that girls and boys have equal access to education and that community-based education is integrated into the state school system," said Gerntholtz. "Donors should undertake to provide long-term support for schooling for girls and carefully examine what their funds are used for."