Was the anti-nuclear movement a mistake?

Was the fixation of the West German opposition movements on atomic energy a historical mistake? 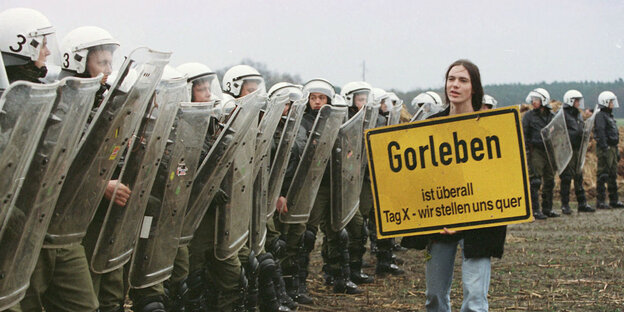 When it comes to climate protection, in addition to the insufficiently developed political will in some places, something else is increasingly missing: the resource of time. We should have started looking into it earlier. A heretical question is therefore making the rounds: Have the progressive forces of the Federal Republic been working too long and too exclusively on overcoming nuclear power - and thereby neglecting the climate crisis?

It is correct: In no country in the world has the fundamental conflict over atomic energy been honored with greater dedication and perseverance than in the old Federal Republic of Germany. Since the 1970s, the locations of the nuclear industry have developed into focal points of previously independent currents of the extra-parliamentary opposition.

Peace movement, environmental movement, women's movement, alternative movement - in the common resistance against high-risk technology, they all experienced a surge of politicization that went beyond their respective core concerns. This led to the founding of the Green Party. The anti-nuclear movement became the cement of a milieu that now, decades later, is preparing to shape the reality of society as a whole in Germany. Nobody, no protagonist and no follower could expect this long-range effect or even formulate it as a goal.

The anti-nuclear movement led to the founding of the Greens

That is point one and from this perspective - in retrospect - the fixation on a technology with the traumatic background of Hiroshima and Nagasaki was a pretty good idea.

Point two of the retrospective consideration of the anti-nuclear power movement concerns a consequential effect that was also not intended by the people involved, but is all the more tangible. The point of the exercise was actually: the "immediate exit". In real life, that stretched for almost half a century. The effect of the movement was different, one that, ironically, the proponents of atomic energy are more aware of than their opponents.

The uninterrupted illumination of the risks of the nuclear facilities down to their smallest technical ramifications, the development of alternative expertise, which finally made it to the top of the relevant federal authorities and government commissions, made an uncontrollable technology not safe, but certainly safer - and by the way, too alarmingly expensive. The fact that this densely populated country has been spared from a catastrophic disaster to this day is also due to the fact that nuclear facilities are operated relatively seriously under constant observation by their opponents. Also in this respect: no mistake, nowhere.

Finally: At the latest with the recognition of man-made climate change as a real physical phenomenon, the criticism of the nuclear power plant was under increasing pressure to justify itself. Those who get out have to get back in somewhere, demanded the opponents of nuclear power - and they were right. It couldn't be the fossil fuels coal, oil and natural gas. The development of renewable energy technologies thus became - to a greater extent and earlier than anywhere else in the world - the core mission of an entire generation of scientists who were fundamentally critical of the atom. The real prospect of phasing out coal and nuclear energy created sufficient pressure to develop new, low-risk energy technologies.

It is more than a thesis: Without the persistent fixation of the opposition movement on the nuclear power plant resistance, the new renewables as competitive energy technologies would not (yet) exist today.

GERD ROSENKRANZ is Senior Adviser at the transformation think tank Agora Energiewende and co-founder of the magazine zeozwei, from which taz FUTURZWEI emerged.