What are the four levels of communication

The four sides of a message

The four sides of a message we explain to you in the following:

The side of the Factual content indicates what to inform about. So here we are communicating the pure informationthat contains the message. At the factual level, we therefore initially provide information about Facts and Data. The recipient only has to decide whether the content is true or untrue and relevant or irrelevant.

The side of the Appeal expresses what the sender wants the receiver to do. Hardly anything is said simply like that, almost all messages have the function of the recipient influence to take. The message is also used to send the To initiate the recipientto do, to let go, to think or to feel something. On the roll call level, both Wishes, appeals, advice as well as instructions are given.

The side of the relationship contains information about what the sender thinks of the receiver and how he feels about him. This will be in the way of Formulations and speaking clearly. Also gesture and facial expressions support this side, such as frowning. The relationship level can also be clearly communicated or hidden. If the recipient hears a message on the relationship ear, he or she can feel valued, respected, criticized or despised, for example.

The side of the Self-revelation indicates what I reveal about myself. Each message does not only contain information about the subject matter. The sender also reveals something about himself in the message, such as own feelings, values, views and needs. This self-disclosure can be intentional or unintentional and is either communicated clearly or is only contained covertly in the message.

Here we have summarized the four levels of communication for you again:

The 4-ear model: 4 sides of a message

In the following figure we have graphically shown the four-ear model again. You can see that the sender's statement covers all four pages of the message and that these four pages also reach the recipient. 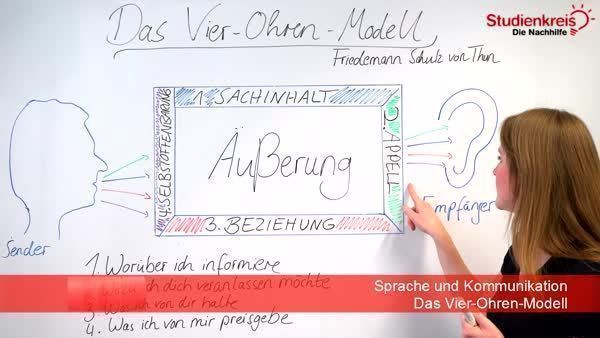 Since the message is only ever understood equally at the factual level by the sender and recipient, misunderstandings can arise. Because the recipient has to first read the four sides of the message perceive and interpret. For example, if the speaker prioritizes the relationship side, but the recipient the side of self-disclosure, it can happen that a message is misinterpreted.

Application of the four-ear model to an example

We'll apply the four-ear model to an example: Tim asks his mother to cook him his favorite meal again. While eating, he asks his mother: "Have you changed the recipe?"

You have already learned a lot about the four-ear model from Schulz von Thun. You can deepen your knowledge with our tasks. We wish you a lot of fun!