The Labor day (outside the USALabor Day) is Labor Day, as it is called and celebrated in English-speaking countries around the world. As in Germany, it is a national holiday in most countries and is celebrated as a day of remembrance for the workers' movement. 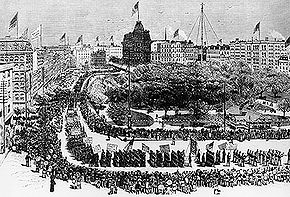 The roots and idea of ​​Labor Day go back to 1882 in the United States of America and have their origins in the eight-hour day movement of previous decades. On the basis of this movement a. in May 1882 in the Central Labor Union, a box of the Knights of Labor, the idea of ​​a "Monster Labor Festival"to organize in which every worker should have the opportunity to participate.[1] The origins and authorship of Labor Day are still described quite differently in American history books (see note below). In any case, the fact is that the Central Labor Union accepted a proposal to hold a demonstration and public holiday for workers, founded a committee for the organization and implementation, and sent out 20,000 invitation cards in June, i.e. 3 months in advance[2] and carried out the demonstration followed by a picnic on September 5, 1882 in New York City, henceforth known as Labor Day.[3][4] The number of those involved in the demonstration ranges between at least 10,000, depending on the information[5] up to about 20,000[6].

At the folk festival-like picnic in the Elm Park it is said to have been almost 50,000 people[7]that turned the day into a powerful demonstration. The tradition of combining political speeches, demonstrations and celebrations on Labor Day began here on September 5, 1882.

Whoever had the first idea of ​​planning and carrying out a memorial, demonstration and public holiday for workers - by that day at the latest, Labor Day was on everyone's lips, known and demanded to be implemented. The idea spread and was implemented in around 400 cities in the country as early as 1889.

This memorable day was not just the work of a few individuals, it was the work of thousands of workers and trade unionists around the world who laid the groundwork for Labor Day through the eight-hour day movement and its demonstrations . The continuity in the struggle for the eight-hour day, starting with the programmatic idea and development by the Welsh entrepreneur and social reformer Robert Owen between 1830 and 1834 through to the use of the labor movement over five decades, created awareness among the workers and gave them the strength to do so To make workers' holiday an integral part of society.

In 1889, at the International Socialist Congress in Paris, it was decided to let Workers' Day take place around the world on May 1st.[8] As a result, May 1st was declared Labor Day in most countries of the world, but especially in the communist states.

Even if the labor movement had its origins in England at the time of the Industrial Revolution and Karl Marx and Friedrich Engels wrote the Communist Manifesto in London, Labor Day based on the American or German model still does not seem to be able to assert itself in the political public.

Labor Day is celebrated in Great Britain as May Day on May 1st. celebrated in London with demonstrations since the mid-1880s. Largely ignored by the government and the media, the trade union movement has been continuously trying to enforce May 1st as a public holiday for workers since the 1970s.[15] To take the pressure off the movement, the government gave in in 1978 with another bank holiday (the first Monday in May in England, Wales and Northern Ireland and the last Monday in May in Scotland) as a national holiday.[16] In terms of content, this holiday has nothing in common with Labor Day.

The Beltane Festival is also celebrated on May 1st in Great Britain and Ireland.

Labor Day in the United States, which is always celebrated on the first Monday in September, has been a public holiday since 1894 and is traced back to the eight-hour day campaigns of the American labor movement. The Knights of Labor, founded in 1869, which rose from 1879 under Terence Vincent Powderly to what was then the largest national trade union organization at the time, took over the campaign and leadership in the decades-long struggle for the introduction of the eight-hour day from 1884.[18] On the basis of this long-standing movement, the first impressive Labor Day demonstration of the workers' movement took place in 1882 (see above).

For most Americans (and Canadians too), Labor Day now also means the end of summer and the travel season. Beaches and excursion destinations are once again overcrowded with people who want to enjoy the last long summer weekend.[19]

In Canada the tradition of Labor Day is assigned to April 15, 1872, where some 10,000 workers in Toronto under the title "Workingman's demonstration"demonstrated for the abolition of a law that criminalized the trade unions as conspiratorial organizations.[20]

On July 23, 1894, Labor Day was made a national holiday by the Canadian government and, as in the USA, set on the 1st Monday in September.

The origins of Labor Day in Australia are often traced back to the first successful demonstrations on the eight-hour day in Sydney in 1855 and in Melbourne in 1856.[21] The first Labor Day demonstration that Australia is happy to claim took place on March 16, 1861 in Brisbane, Queensland, with a handful of construction workers who had previously successfully enforced the eight-hour day. In 1889, the attempt to place Labor Day in March on May 1, proposed by the International Socialist Congress in Paris, failed. Finally, in 1893, Labor Day and the eight-hour demonstration were put on the 1st Monday in May.[22] The individual federal states of Australia could not agree with each other, so that Labor Day is still celebrated on quite different days in Australia.

In New Zealand in 1840 by Samuel Duncan Parnell (1810-1890) an eight-hour day movement was initiated, which 50 years later led to the Jubilee March and the first legally protected Labor Day in 1890. A year earlier, in 1899, the Labor Day Act of 1899 created the legal basis for this. But the first Labor Day demonstrations had already been held nine years earlier in October and November 1889 in major cities across the country.[23]

When it comes to the question of who invented Labor Day and thus can assign its historical merit, there are still different perspectives today, depending on the interests. The situation also becomes confusing because the two actors to whom the merit is assigned by the respective sides show a similarity of names with McGuire and Maguire.

Peter J. McGuire (1852–1906), is still persistently named by the American Federation of Labor as the "father" and "inventor" of Labor Day.[24] The Library of Congress also continues to take this view uncritically[25], whereas meanwhile quite a few sources [26][27][28] , such as the U.S. Department of Labor[29], at least reflect the contradiction in the historical accounts.

According to more recent sources, Peter J. McGuire must have only been a speaker on the first Labor Day on September 5, 1882 and in 1897 publicly claimed the authorship for himself[30]whereas Matthew Maguire, as Secretary of the Central Labor Union of New York, is said to have been the originator and organizer of the first Labor Day.[31]

All sources are in English